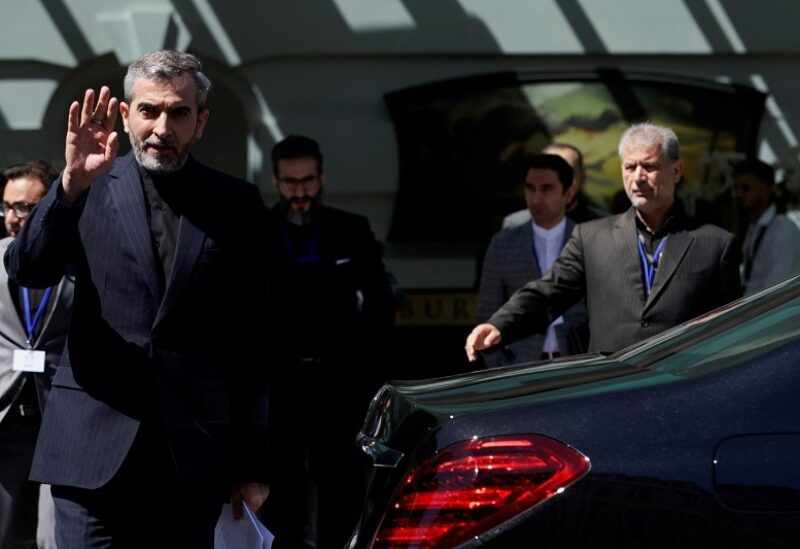 In a bid to salvage the agreement on Tehran’s atomic ambitions, negotiators kicked off a fresh round of talks over Iran’s nuclear program in Vienna on Thursday.
Officials from world powers and Iran were meeting in the Austrian capital for the first time since March, when negotiations, which began in 2021 to reintegrate the United States into the agreement, stalled.
A senior EU official said progress was being made on some of the remaining obstacles, including guarantees that the United States would not scupper the deal by going back on its word in the future.
“We have now quite substantial guarantees,” the official said. “It’s my understanding that Iran is happy and feels satisfied with what is in the text.”
A demand by Tehran that the United States remove the country’s powerful Islamic Revolutionary Guard Corps from the State Department’s official blacklist of “foreign terrorist organizations” has been dropped from the discussions, the official added. It will instead be handled “in the future” — after the deal.
Tehran and Washington still have to agree on “issues related to sanctions lifting and a couple of nuclear questions that did not exist in March as the Iranians advanced their program,” the official said.
“We are a bit exhausted, I cannot imagine myself here in four weeks,” the EU source said. “This is not another round, we are here to finalize the text.”
“I think there is a real possibility but it’s not going to be easy.”
US National Security Council spokesman John Kirby told reporters on Thursday there was “a deal on the table” and Iran “ought to take it.”
“You’ve heard the president say we’re not going to wait forever for Iran to take this deal,” Kirby said, adding that “clearly time does appear to be getting very short in terms of being able to get to a deal.”
In late June, Qatar hosted indirect talks between Tehran and Washington in the hope of getting the process back on track — but those talks failed to make a breakthrough.
In a last-ditch effort, EU foreign policy chief Josep Borrell submitted a compromise proposal last month and called on the parties to accept it to avoid a “dangerous nuclear crisis.”
Borrell said the draft text includes “hard-won compromises by all sides” and “addresses, in precise detail, the sanctions lifting as well as the nuclear steps needed to restore” the 2015 pact.
Bilateral talks began earlier on Thursday at Vienna’s luxury Palais Coburg hotel under the auspices of the European Union’s representative Enrique Mora.
The Iranian and Russian delegations, which have traditionally been close in the negotiations, held a separate meeting.
Britain, China, France, Germany, Iran, Russia and the United States signed the Joint Comprehensive Plan of Action, or JCPOA, in July 2015. Delegations from all parties were set to partake in Thursday’s talks, but officials from the US and Iran are not expected to meet face to face.
The JCPOA aims to guarantee the civilian nature of Iran’s nuclear program in exchange for a gradual lifting of sanctions.
But following the unilateral withdrawal of the United States in 2018 under former president Donald Trump and the re-imposition of US sanctions, Tehran has backtracked on its obligations.
Iran subsequently exceeded the JCPOA’s uranium enrichment rate of 3.67 percent, rising to 20 percent in early 2021.
It then crossed an unprecedented 60-percent threshold, getting closer to the 90 percent needed to make a bomb.
The head of the UN nuclear watchdog, Rafael Grossi, on Tuesday warned Iran’s program was “moving ahead very, very fast” and “growing in ambition and capacity.”

Cautious optimism
Ahead of Thursday’s talks, officials expressed cautious optimism, while cautioning that the parties remained far apart on key issues.
These include sanctions, Iranian demands for guarantees and the end of a probe by the UN nuclear watchdog, the International Atomic Energy Agency.
The head of the US delegation, Rob Malley, and the head of Tehran’s representatives, Ali Bagheri, said on Twitter ahead of the talks that they were coming in good faith but put the onus on each other.
Analysts said reviving the JCPOA remained the best option.
“The last thing the United States needs is a nuclear crisis with Iran that could easily escalate to a broader regional conflict,” Suzanne DiMaggio, a senior fellow at the Carnegie Endowment for International Peace, said in a statement.
Ellie Geranmayeh, an analyst at the European Council on Foreign Relations (ECFR), said that “at the end of the day, Tehran and Washington know the alternatives to a JCPOA collapse are terrible.”
“This is unlikely to be a meeting that resolves the outstanding issues,” but “it could create the breakthrough necessary to push the talks toward a finishing line rather than a collapse,” she said.