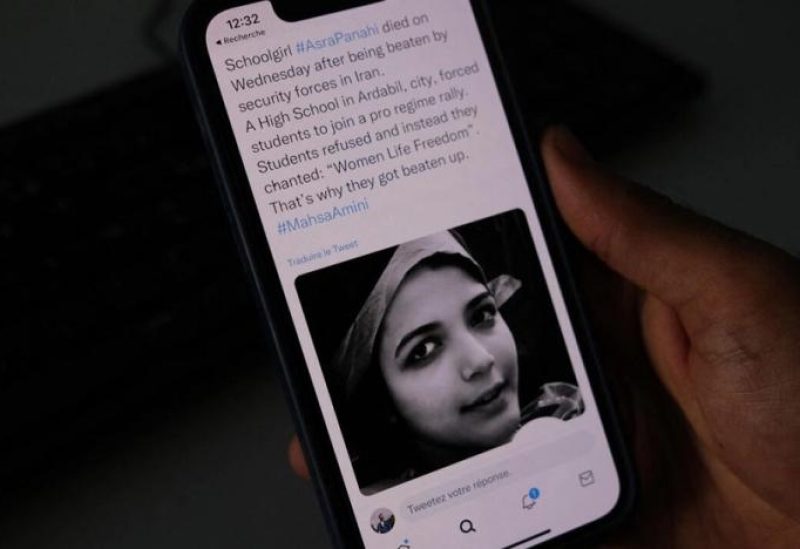 A 15-year-old Iranian girl died last week after being beaten during a raid by the security forces on her school, a teachers’ union said, urging the authorities to stop killing “innocent” protesters.

The pupils had been taken into town for an “ideological event” at a spot known to be a center for protests sparked by Mahsa Amini’s death in the custody of Iran’s notorious morality police.

Some pupils, who started “chanting slogans against discrimination and inequality”, were “subjected to violence and insults by plainclothes and veiled women”, the union said.

After being returned to school, they were beaten again, it said in a statement issued on Monday.

“After that one of the pupils named Asra Panahi unfortunately passed away in hospital and a number of students were arrested,” it said, adding the beating left another pupil in a coma.

State television later aired an interview with her uncle in which he said she died of heart failure.

Ardabil’s parliamentary representative, Kazem Mousavi, was quoted as saying she had “committed suicide by swallowing pills” in a report by the Didban Iran website.

Those accounts raised the ire of retired Iranian football star Ali Daei, who hails from Ardabil and has run into trouble with the authorities over his support for the Amini protests.

In a post to his 10 million Instagram followers, Daei said he did not believe Panahi had died of heart failure and dismissed as “rumors” the MP’s claim that she had taken her own life.

The death of the 22-year-old Amini, after her arrest for allegedly breaching Iran’s strict dress code for women, has fueled the biggest protests seen in the country for years.

In its statement issued on Tuesday, the teachers’ union slammed the school’s decision to get pupils involved in the “ideological event” without the consent of their parents.

“The council calls on the system and military and security forces to stop their transgressions against schools,” it said.

“This council also calls on the system to stop the killing of innocent people and defenseless protesters.”

“If Mr. Daei has any proof regarding the claims made about the death of the girl pupil in Ardabil, he is expected to present them to the related officials as soon as possible and to follow up on them,” it said.

A coalition of human rights groups, including Amnesty International, said on Monday that the security forces’ crackdown on the Amini protests has killed at least 23 identified children.