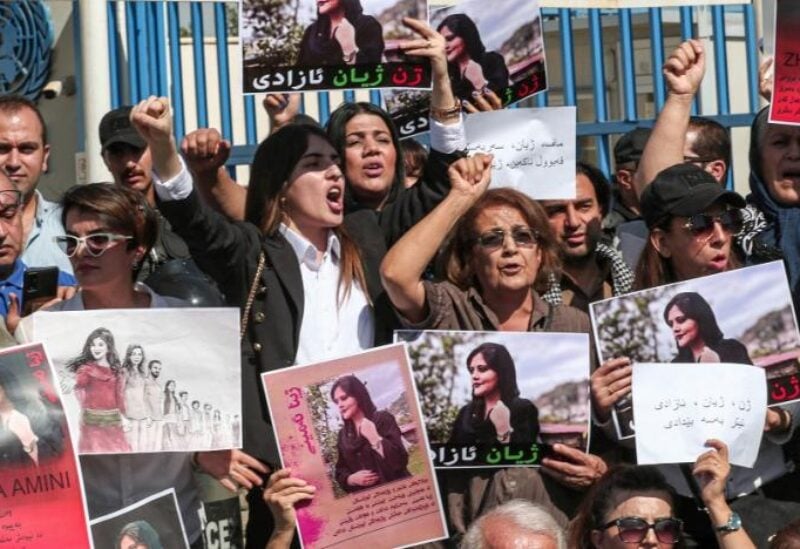 Women chant slogans and hold up signs depicting the image of 22-year-old Mahsa Amini, who died while in the custody of Iranian authorities, during a demonstration denouncing her death by Iraqi and Iranian Kurds outside the UN offices in Erbil, the capital of Iraq's autonomous Kurdistan region, on September 24, 2022. (AFP)

Iranian riot police and security forces clashed with demonstrators in dozens of cities on Tuesday, state media and social media said, amid continuing protests against the death of young Iranian woman Mahsa Amini in police custody.

Amini, 22, from the Iranian Kurdish city of Saqez, was arrested this month in Tehran for “unsuitable attire” by the morality police who enforce the Islamic Republic’s strict dress code.

Her death has sparked the first big show of opposition on Iran’s streets since authorities crushed protests against a rise in gasoline prices in 2019.

Despite a growing death toll and a fierce crackdown by authorities, videos posted on Twitter showed demonstrators calling for the fall of the clerical establishment while clashing with security forces in Tehran, Tabriz, Karaj, Qom, Yazd and many other Iranian cities.

State television said police clashed with what it called “rioters” in some cities and fired tear gas to disperse them.

“I will kill those who killed my sister,” chants of protesters could be heard in one of the videos from Tehran, while activist Twitter account 1500tasvir said:”The streets have become battlefields.”

To make it difficult for protesters to post videos on social media, authorities have restricted internet access in several provinces, according to Internet blockage observatory NetBlocks on Twitter and sources in Iran.