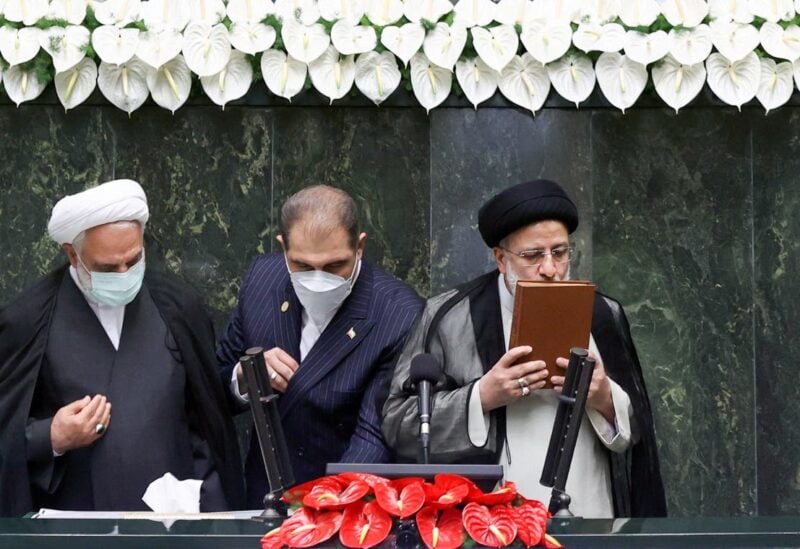 Iran's new President Ebrahim Raisi kisses the Quran during his swearing-in ceremony at the parliament in Tehran, Iran, August 5, 2021. (Reuters)

Sanctions on Iran “must be lifted” and Tehran supports “any diplomatic proposal” that would achieve this, Iran’s newly elected President Ebrahim Raisi said during his inauguration ceremony on Thursday.

Raisi was sworn in as president at the parliament in the capital Tehran in a ceremony attended by delegations from 73 countries.

“Sanctions against the Iranian nation must be lifted, and we will support any diplomatic proposal that achieves this goal,” Raisi said.

The United States and Iran have engaged in indirect talks in Vienna since April to revive the 2015 nuclear deal. Washington withdrew from the deal under former President Donald Trump in 2018, reimposing sanctions that have crippled Iran’s economy.

The last round of talks took place on June 20, and it is not yet clear when the talks will resume.

Raisi had previously stated that, like Supreme Leader Ali Khamenei, he supports the nuclear deal.

“The nuclear program of the Islamic Republic is completely peaceful … [nuclear] weapons have no place in the country’s defense strategy,” Raisi said.

“Pressure and sanctions will not prevent the Iranian nation from pursuing its legal rights,” he added.

Raisi, who is sanctioned by the US in part over his involvement in the mass execution of thousands of political prisoners in 1988, said his top priority in foreign policy will be to improve ties with neighboring countries.