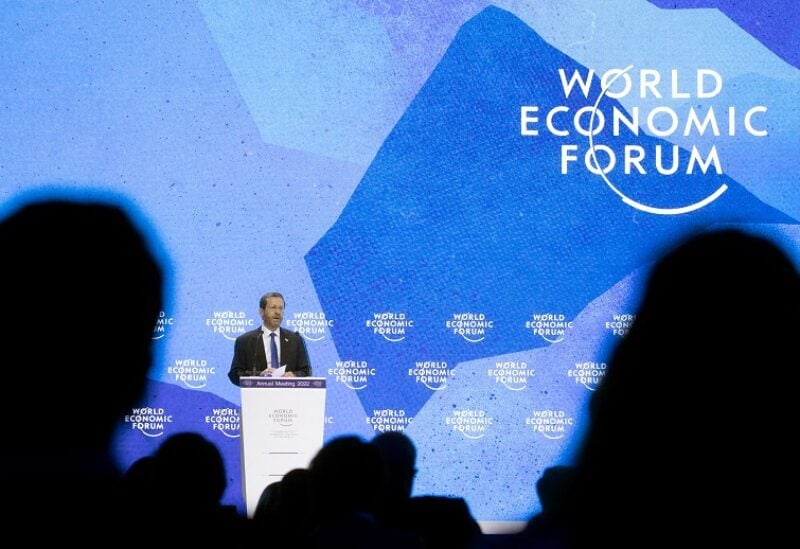 “Tehran spreads hate, pain and suffering”, Israeli President Isaac Herzog told the World Economic Forum on Wednesday, adding that “the Iranian regime systematically undermines the stability of the region. Israel and all nations of the world cannot accept Iran’s pursuit of nuclear capabilities, recognizing the threat it poses to Israel and the entire Middle East.”
He said that every country or region infiltrated by Iran has had “the life sucked out of its people and its land,” adding that Tehran spreads hate, pain and suffering.
“Prosperity, human liberty, creativity and growth are all erased,” the president said, pointing to what has happened in Iraq, Yemen, Gaza, Syria and Lebanon.
“Israel is eager to share its prosperity and successes with all its neighbors to break down barriers imposed by Iran’s influence. I truly believe that if we only choose the forces of light, the path to a drastically different brighter future is closer than we can imagine,” Herzog said.
He added that Israelis will always extend their hands for peace to their neighbors from the “Levant to the Gulf, from the Maghreb to the Mashreq, from our immediate neighbors the Palestinians to the entire Muslim world, and also to the entire continent of Africa, and the entire Middle East.”
When asked whether Saudi Arabia would follow in the footsteps of its Gulf neighbors the UAE and Bahrain in normalizing relations with Israel, Herzog said that although the Kingdom is a “very important country in the region,” the process of joining the Abraham Accords “has to take its time.”
“I think the Kingdom of Saudi Arabia is a very important country in the region. And we would love to see developments in that direction, but it’s a process that has to take its time I guess,” Herzog commented.
Saudi Arabia’s Foreign Minister Prince Faisal bin Farhan reiterated the Kingdom’s stance regarding normalization with Israel at the WEF on Tuesday, saying nothing had changed despite recent unconfirmed media reports suggesting otherwise.
“I’ve addressed that several times in the past and nothing has changed in how we view the subject. I think we have always seen normalization as the end result, but the end result of a path,” Prince Faisal told the WEF.
“We always envisioned that there will be full normalization with Israel, and I’ve said before that a full normalization between us and Israel, between the region and Israel, will bring immense benefits — we won’t be able to reap those benefits unless we address the issue of Palestine,” the foreign minister said.
Herzog also spoke about the death of veteran Palestinian-American journalist Shireen Abu Akleh, who was killed in Jenin while covering Israeli raids on a refugee camp in the West Bank on May 11.
“This is of course a very sad event. And it pains me like it pains many Israelis,” the president said.
He said that Israel offered the Palestinians a joint investigation into the circumstances of the “tragic event” but that the Palestinians refused to cooperate.
“They took the body. They took the bullet and one cannot substantiate any one of the scenarios without those facts. And Israel was open and transparent and offered the US to join this process of investigation as well because we pay high importance to the freedom of speech and the work of journalists and media channels, and we respect them,” he added.