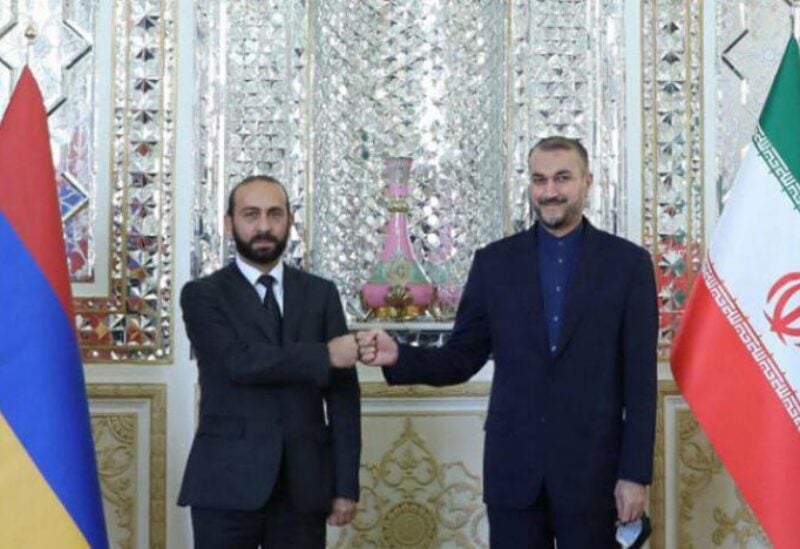 Iran affirmed its “good” relations with Azerbaijan, despite Tehran’s accusation that the military maneuvers on the border are being used to launch Israeli activity, which Baku denies.

The Iranian Foreign Ministry warned Azerbaijan against allowing “third parties” to act against it, saying it knows “how to maintain its security.”

Amirabdollahian said at a joint press conference in Tehran with his Armenian counterpart Ararat Mirzoyan that “we are witnessing the presence of foreign terrorists and the destructive activities of the Zionist regime in the region.”

The spokesman said his country enjoys good relations with both Baku and Yerevan, and its relations with one nation are not against another, according to a report by the Iranian news agency (IRNA).

Khatibzadeh was asked about “the presence of terrorists” in Azerbaijan near the Iranian border. He indicated that Iran had received reports on this issue since the war between Baku and Yerevan.

“We have informed our friends in Baku, and they asserted during the various meetings that there is no threat to other countries.”

Turkey brought “Syrian mercenaries” from northern Syria to Azerbaijan to help fight against Armenia in the Nagorno-Karabakh region last year.

Khatibzadeh noted that Tehran informed Baku from the beginning that it recognizes Azerbaijan’s territorial integrity and national sovereignty, and it helped preserve it.

Baku should not allow its borders and country to be used by third parties against Iran, asserted the spokesman.

“Iran knows how to maintain its security, and it is only right that Baku fulfills its sovereign duties,” said Khatibzadeh about allegations that the Israelis used Azerbaijan’s territory to conduct activities inside Iran.

Khatibzadeh addressed the joint Turkish-Azerbaijani drills in Nakhchivan, saying everyone must help bring peace, stability, and calm to this region.

“Unfortunately, many military maneuvers have been conducted in this region without any justification during the past weeks.”

Meanwhile, Azerbaijan rejected allegations of foreign intervention in its affairs, saying it pursues an independent policy based on national interests.

“We do not accept the allegations about the presence of any third forces near the Azerbaijan-Iran border … these views have no basis,” Azerbaijan’s Foreign Ministry spokesperson Leyla Abdullayeva said.

She emphasized the importance of “friendly and good-neighborly relations with neighboring countries.”

Abdullayeva stressed that Azerbaijan supports the establishment of relations with all countries based on respect for each other’s international borders, which is the unchanging position of the country.

She recalled that Azerbaijan has suffered for decades from the military occupation of part of its territory and the violation of its international borders.

The spokesperson stressed that the inviolability of internationally recognized borders is one of the fundamental principles Azerbaijan has always been guided by.