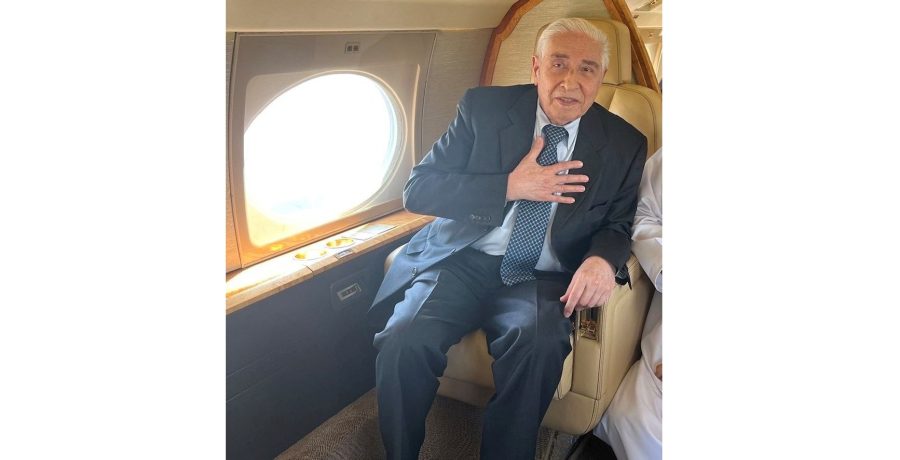 Baquer Namazi gestures prior to takeoff to Muscat, Oman, on board airplane in Tehran, Iran October 5, 2022. Courtesy of Namazi family/via REUTERS

Baquer Namazi, an 85-year-old Iranian American who was imprisoned in Iran on spurious spying charges, landed in Muscat on Wednesday after Iran allowed him to depart for medical care, according to an Omani government agency on Twitter.

Earlier, Jared Genser, a lawyer for the Namazi family, said Namazi was on his way to Muscat “after more than 6.5 years of illegal captivity in Iran,” alluding to the time Namazi was imprisoned as well as the time he was released but essentially prevented from leaving Iran.

“After a brief transit, he will travel on to Abu Dhabi and then undergo a carotid endarterectomy at the Cleveland Clinic (there) to clear out a severe blockage to his left internal carotid artery (ICA), which puts him at very high risk for a stroke,” Genser added in a statement.

His departure from Iran was first reported by Iran’s state media, publishing a video showing him boarding a private plane accompanied by a man in Omani national dress, but it did not say where he was headed.

The video showed him struggling to climb the stairs to board the plane, on which the light blue insignia of the Royal Air Force of Oman could be seen.

Namazi, a former official with the U.N. children’s agency UNICEF, holds U.S. and Iranian citizenship and was one of four Iranian Americans, including his son Siamak, detained in Iran in recent years or barred from leaving the country.

Namazi was convicted in 2016 of “collaboration with a hostile government” and jailed for 10 years. Iranian authorities released him on medical grounds in 2018 and closed his case in 2020, commuting his sentence to time served.

However, they had effectively barred him from leaving until Saturday, when the United Nations said he would be allowed to leave for medical treatment.

His son Siamak, 51, who was also convicted of “collaboration with a hostile government” in 2016, was released from Tehran’s Evin prison Saturday on a one-week, renewable furlough after nearly seven years in detention.

The U.S. government has described the charges against both as baseless.

In the statement released by the family’s lawyer, Babak Namazi, Baquer Namazi’s son, voiced gratitude for his father’s departure from Iran but sorrow at his brother Siamak’s inability to leave the country.

“While getting my father out of Iran is incredibly important, today is also bittersweet. My brother Siamak as well as Americans Emad (Shargi) and Morad Tahbaz remain detained in Iran and our nightmare will not be over until our entire family (and) the other Americans are reunited with their families,” he said.

The other U.S. citizens detained in Iran include environmentalist Tahbaz, 67, who also has British nationality, and businessman Shargi, 58.

“Today is a good day for the Namazi family, but the work is far from over. We now need the United States and Iran to act expeditiously to reach an agreement that will finally bring all of the American hostages home,” Genser, the family’s lawyer, said, adding that Baquer Namazi will immediately go to the hospital upon his arrival in Abu Dhabi.

It was not immediately clear why Iran had allowed Baquer Namazi to leave the country and Siamak Namazi to be furloughed from prison.

Iranian Americans, whose U.S. citizenship is not recognized by Tehran, are often pawns between the two nations, now at odds over whether to revive a fraying 2015 pact under which Iran limited its nuclear program in return for sanctions relief.

Iran is also grappling with the biggest show of opposition to its clerical authorities since 2019 with dozens of people killed in unrest across the country ignited by the death in police custody of Mahsa Amini, a 22-year-old woman.