Iranian currency hits new low against the dollar amid unrest 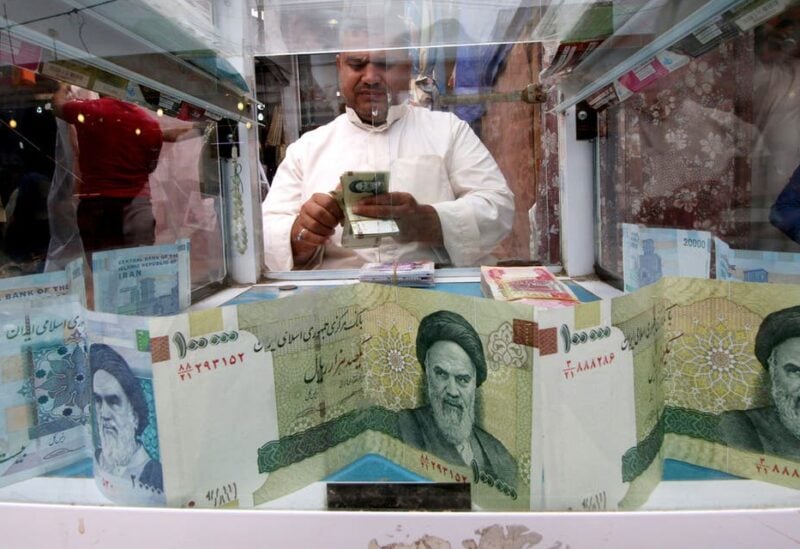 A man counts Iranian rials at a currency exchange shop, before the start of the U.S. sanctions on Tehran, in Basra, Iraq November 3, 2018. (Reuters)

After weeks of nationwide unrest, Iran’s currency fell to its lowest value against the US dollar on Tuesday. The rial has also suffered from a stalemate in negotiations to resurrect Tehran’s nuclear deal with world powers.

Iran’s currency was trading at 32,000 rials to the dollar at the time of the 2015 nuclear accord that lifted international sanctions in exchange for tight curbs on Tehran’s nuclear program.

The rial’s new low comes amid protests first sparked by the Sept. 16 death of 22-year-old Mahsa Amini in the custody of the country’s morality police.

Protesters have targeted Iran’s state-mandated headscarf, or hijab, for women. But the sickly state of Iran’s economy is also a main force driving Iranians into the streets. Soaring prices, high unemployment and corruption have fueled the unrest.

The Iran nuclear deal has been teetering toward collapse since talks stalled months ago. After protests erupted, the US and EU imposed additional sanctions on Iran for its brutal treatment of demonstrators and its decision to send hundreds of drones to Russia for use in its war in Ukraine.

The White House has faced growing pressure to scuttle the deal altogether. The US special envoy to Iran, Robert Malley, said on Monday that the administration “makes no apology” for its refusal to declare the deal dead.

Iran’s economy has deteriorated significantly since former President Donald Trump withdrew the US from the nuclear deal in 2018 and restored suffocating sanctions on Iran’s crucial oil and banking sectors.

Thousands of people have been arrested nationwide in the crackdown on the protests, rights activists say, while Iran’s judiciary has said 1,000 people have already been charged in connection with what it describes as “riots.”

The trial of five men charged with offenses that can carry capital punishment over the protests opened on Saturday in Tehran.

One of the men, Mohammad Ghobadlou, was sentenced to death at the first trial session, according to a video from his mother posted by the Washington-based Abdorrahman Boroumand Center. However this has not been confirmed by the judiciary.

The popular Iranian rapper Toomaj Salehi has become the latest high profile figure to be arrested, according to the New York-based Center for Human Rights in Iran.

At least 46 journalists have been arrested so far, according to the New York-based Committee to Protect Journalists. Tehran journalist Marzieh Amiri is the latest to be detained, her sister Samira wrote on Instagram.

Meanwhile the prominent freedom of expression campaigner and Wall Street Journal contributor Hossein Ronaghi, who was arrested shortly after the protests began, is on “hunger strike and not well,” his brother Hassan wrote on Twitter after the activist was granted a meeting with his parents.