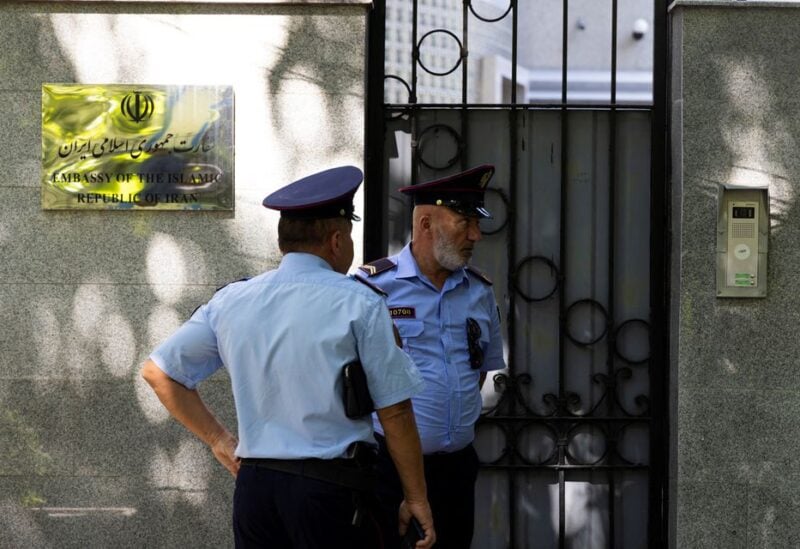 Police officers stands in front of the Embassy of the Islamic Republic of Iran in Tirana, Albania, September 7, 2022. REUTERS/Florion Goga

Albanian Prime Minister Edi Rama said in a rare video address on Wednesday that he had ordered Iranian diplomats and staff to close the embassy and leave the country within 24 hours.

A Reuters witness saw a man from inside the embassy throwing papers in a rusted barrel, with flames illuminating the walls of the three-story embassy.

Washington, Albania’s closest ally, also blamed Iran for the attack and promised to “take further action to hold Iran accountable for actions that threaten the security of a U.S. ally.”

Tehran has strongly condemned Tirana’s decision to cut its diplomatic ties calling as “baseless claims” Albania’s reasons for the move.

Albania and Iran have had tense relations since 2014, when Albania accepted some 3,000 members of the exiled opposition group People’s Mujahideen Organization of Iran, also known by its Farsi name Mujahideen-e-Khalq, who have settled in a camp near Durres, the country’s main port.

Days after the cyberattack Tirana based media have reported that hackers have published personal data of the opposition members that were saved in Albania’s state computers such as personal, social and security numbers, names and photos.

On Thursday morning, it appeared calm outside the embassy in Tirana located just 200 metres (yards) away from the prime minister’s office.

A black Audi with diplomatic car plates and darkened windows was seen going in and out as a police officer guarded the entrance.