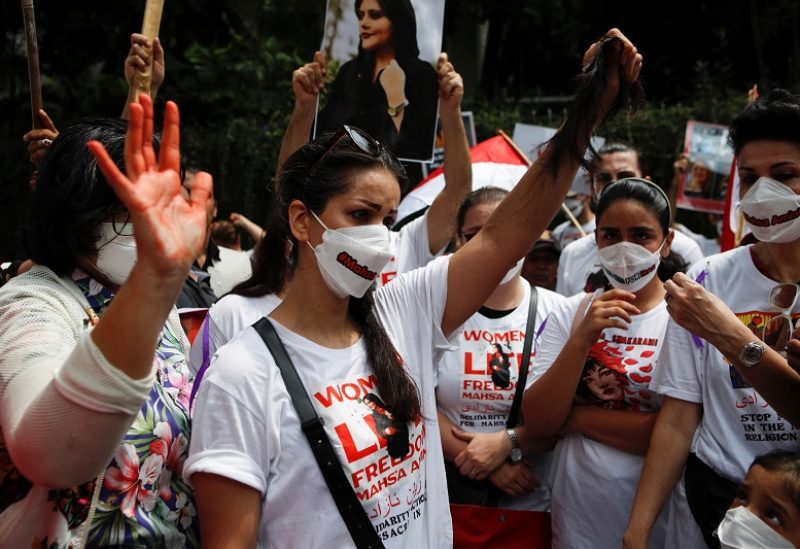 A woman holds up hair after cutting it off during a protest against the Iranian regime, following the death of Mahsa Amini, outside Embassy of Iran in Jakarta , Indonesia, October 18, 2022. REUTERS/Ajeng Dinar Ulfiana

Amidst the continuous protests against the regime across the country for a second straight month, members of an Iranian opposition group living in exile on Wednesday demanded that the West steps up its pressure on Tehran.

The National Council of Resistance of Iran said during a briefing in Washington, attended by Arab News, that Western countries should order the closure of all Iranian embassies and impose more severe sanctions against the regime.

The current widespread protests began shortly after the death in police custody of 22-year old Mahsa Amini on Sep. 16. She had been arrested by the so-called morality police three days earlier for not following strict rules on women’s dress.

It is widely believed that her death was the result of a beating by officers. The Iranian government denies that this was the case but outraged citizens are not convinced and have been taking to the streets in protest for weeks, prompting a brutal crackdown by security forces that has resulted in many deaths, injuries and arrests.

Iran has been ruled by its religious establishment since a revolution in 1979 that toppled the ruling, pro-Western shah. Women in the country are required to conform to government restrictions on Western-style clothes, dress modestly and cover their hair with a hijab in public.

Soona Samsami, the NCRI’s US Representative, said the current protests have outlasted all others since 2017 and are mainly being led by women and younger Iranians, who demand the toppling of the regime.

“What is happening in Iran today has all the hallmarks of a revolution in the making,” she said. “We have passed a historic inflection point, with people’s fear dissipating and fear reigning in the regime — a point of no return.”

Samsami called on the international community to take a united stand against the regime in Tehran by closing Iranian embassies all around the world and expelling the country’s diplomats. She also urged the US and the EU to show support for the Iranian public and their “democratic revolution in Iran.”

US President Joe Biden this month denounced the Iranian government’s crackdown on peaceful protesters during the latest unrest and demanded that basic human rights be upheld and human dignity maintained. He added that the US stands alongside Iranian women and all citizens of the country.

“For decades, Iran’s regime has denied fundamental freedoms to its people and suppressed the aspirations of successive generations through intimidation, coercion, and violence,” Biden said.

Iranian President Ebrahim Raisi accused his American counterpart of trying to cause divisions within Iranian society and destabilize the country by inciting action by Iranians against the regime under the pretext of human rights.

“The comments of the American president in support of chaos, terror and insecurity in Iran once again proved the falseness of the claim of protecting human rights, security and peace and gave meaning to the title of the great Satan,” he said

Alireza Jafarzadeh, deputy director of the Washington office of the NCRI, spoke during Wednesday’s briefing about actions of Tehran’s Islamic Revolutionary Guards Corps as it attempts to suppress the ongoing protests and prevent them from spreading further.

“According to hundreds of reports we have received, the plainclothes forces of the IRGC and the Basij (a paramilitary volunteer militia) use maximum brutality and viciousness to beat the protesters and severely injure them,” he said.

“One of the tactics they use is to beat the protesters in the head or break their limbs; this would in effect end their continued participation in the protests for a period.”

Jafarzadeh also said Iranian military forces killed scores of prisoners in the notorious Evin prison who had protested against the regime, describing the incident as a “crime against humanity.”

“On Oct. 15, 2022, 30 to 40 prisoners were killed during an attack on Evin Prison by the IRGC special force guarding the supreme leader,” he said.

“The attack on the prisoners was planned in advance. The savage guards threw some prisoners down from the roof.”

An Iranian government official said the prisoners died as a result of “smoke inhalation” resulting from a fire in the prison that was “a crime committed by a number of the enemy’s agents.”