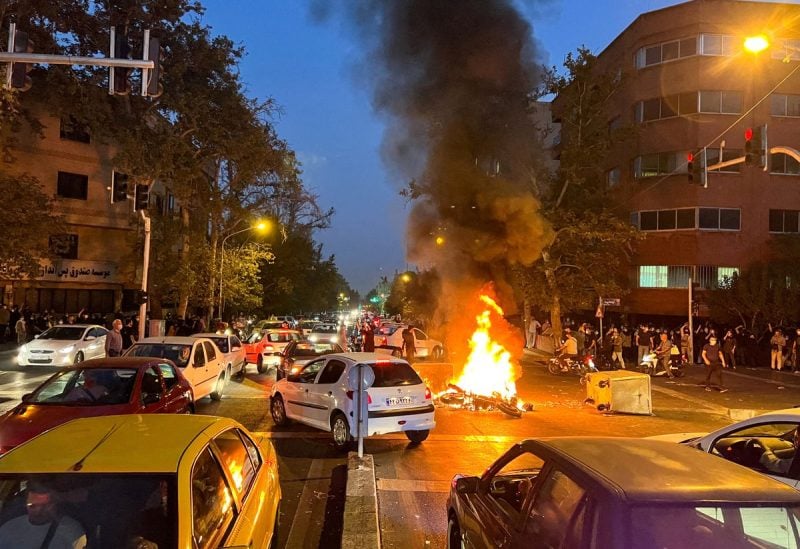 A police motorcycle burns during a protest over the death of Mahsa Amini, a woman who died after being arrested by the Islamic republic's "morality police", in Tehran, Iran September 19, 2022. WANA (West Asia News Agency) via REUTERS/File Photo

Thousands of Iranians demonstrated in the restive southeast on Friday to mark the “Bloody Friday” crackdown by security forces on Sept. 30, as the country’s clerical rulers battled persistent nationwide unrest.

According to Amnesty International, security forces killed at least 66 people in September after firing on protesters in Zahedan, the capital of the volatile Sistan-Baluchistan province. Authorities claimed that the clashes were sparked by dissidents.

A video posted by the widely followed 1500 Tasvir activist Twitter account purported to show thousands marching again in Zahedan on Friday. Reuters could not verify the authenticity of the footage.

Another video which 1500 Tasvir said was from the town of Khash in the southeast showed protesters trampling and breaking a street sign carrying the name of top general Qassem Soleimani, who was assassinated in a U.S. drone attack in 2020 in Iraq.

Popular anger ahead of the Sept. 30 shooting was fuelled by allegations of the rape of a local teenage girl by a police officer. Authorities have said the case is being investigated.

Anti-government demonstrations also started erupting that month after the death of a Kurdish woman, Mahsa Amini, who had been detained by morality police for allegedly flouting the Islamic Republic’s strict dress code imposed on women.

Nationwide demonstrations have since turned into a popular revolt, with people ranging from students to doctors, lawyers, workers and athletes taking part, with fury directed mostly at Supreme Leader Ayatollah Ali Khamenei.

A group of countries led by Germany and Iceland requested a debate on the “deteriorating” situation in Iran at the U.N. top human rights body later this month, a document showed.

The government, which has blamed Amini’s death on preexisting medical problems, has said the protests are fomented by Iran’s foreign enemies including the United States, and has vowed to reestablish order.

It accuses armed separatists of perpetrating violence and seeking to destabilise the Islamic Republic.

Some of the worst unrest has been in areas home to minority ethnic groups with long-standing grievances against the state, including the Sistan-Baluchistan and Kurdish regions.

Sistan-Baluchistan, near Iran’s southeastern border with Pakistan and Afghanistan, is home to a Baluch minority estimated to number up to 2 million people. They have faced discrimination and repression for decades, according to human rights groups. Iran denies that.

The region is one of the country’s poorest and has been a hotbed of tension where Iranian security forces have been attacked by Baluch militants.

The activist HRANA news agency said 330 protesters had been killed in the unrest as of Thursday, including 50 minors. Thirty-nine members of the security forces had also been killed, while nearly 15,100 people have been arrested, it said.

Iran’s hardline judiciary will hold public trials of about 1,000 people indicted for unrest in Tehran, a semi-official news agency said on Oct. 31.

They were accused of acts of sabotage, assaulting or killing members of the security forces or setting fire to public property.

In a statement, United Nations human rights experts urged Iranian authorities on Friday to stop indicting people with charges punishable by death for participation, or alleged participation, in peaceful demonstrations.

The experts, special rapporteurs, expressed concern that women and girls who have been at the forefront of protests might be particularly targeted.

Social media videos purported to be from the town of Saravan in Sistan-Baluchistan showed protesters wearing traditional Baluch robes calling for the death of Khamenei.

“Where did the military forces get trained to shoot people? Today it has become clear that people were killed unjustly,” Molavi Abdolhamid, Iran’s most prominent Sunni cleric and a long-time critic of Iran’s Shi’ite leaders, said in his Friday prayer sermon in Zahedan.”Authorities must condemn this crime, and those who ordered (the events of) Bloody Friday and its perpetrators must be brought to trial,” Abdolhamid added.

It appeared tensions could rise again in Zahedan.

State television reported that the ground forces commander of Iran’s elite Revolutionary Guards, Brigadier General Mohammad Pakpour, told a gathering of Sunni and Shi’ite tribal elders and religious leaders that clerics had to be careful about what they said.