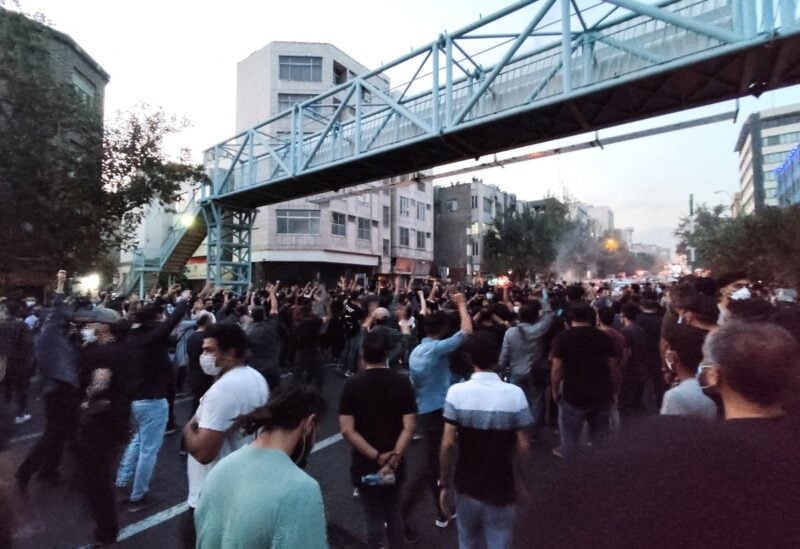 People attend a protest over the death of Mahsa Amini, a woman who died after being arrested by the Islamic republic's "morality police", in Tehran, Iran September 21, 2022. WANA (West Asia News Agency) via REUTERS

Amini, 22, of the northwestern Kurdish city of Saqez, was arrested on September 13 in Tehran by the morality police, who enforce the Islamic Republic’s strict dress code.

She died three days later in hospital after falling into a coma, sparking the first big show of opposition on Iran’s streets since authorities crushed protests against a rise in gasoline prices in 2019.

Despite a growing death toll and a crackdown by security forces using tear gas, clubs and, in some cases, live ammunition, videos posted on social media showed Iranians calling for the fall of Supreme Leader Ayatollah Ali Khamenei.

Officials said 41 people, including members of the police and a pro-government militia, had died during the protests. Iranian human rights groups have reported a higher toll.

A senior member of Komala, an Iranian Kurdish opposition party, told Reuters several of their offices were struck on Wednesday morning and there had been casualties and material damage, but he did not have details.

Iran has blamed armed Iranian Kurdish dissidents for involvement in unrest in the country, particularly in the northwest where most of Iran’s up to 10 million Kurds live.

Early Wednesday, a video showed protesters in Tehran chanting “Mullahs get lost!” “Death to the dictator!” and “Death to the leader because of all these years of crime!”. Reuters could not verify the authenticity of videos on social media.

On Tuesday, a spokesperson for the U.N. High Commissioner for Human Rights called on Iran’s clerical rulers to “fully respect the rights to freedom of opinion, expression, peaceful assembly and association”.

Amini’s death has drawn widespread international condemnation while Iran has blamed “thugs” linked to “foreign enemies” for the unrest. Tehran has accused the United States and some European countries of using the unrest to try to destabilise the Islamic Republic.