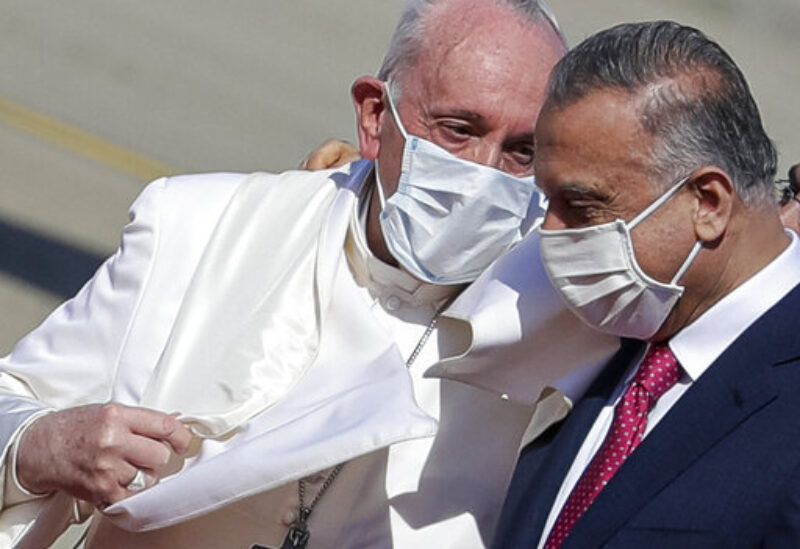 Pope Francis is greeted by Iraqi Prime Minister Mustafa al-Kadhimi as he arrives at Baghdad's international airport, Iraq, Friday, March 5, 2021. The pope is seeking to deliver a message of reconciliation and fraternity, a tough sell given the few Christians who remain in Iraq harbor a lingering mistrust of their Muslim neighbors and face structural discrimination that long predated IS and the 2003 U.S.-led invasion that threw the country into chaos. (AP Photo/Andrew Medichini)

Iraq’s Prime Minister called on Monday for a national dialogue to resolve the country’s outstanding issues as Pope Francis ended his historic trip.

“My brothers and dear opponents, I invite you all to a sincere, open and frank dialogue with the government on the basis of the country’s interest, security and sovereignty,” Mr Al Kadhimi said.

The idea was presented as Pope Francis’ visit presented an opportunity to restore the country’s role in the world despite the challenges it faces, he added

“The special visit, with all the manifestations of national consensus, embodied the essence of our loving, sincere, civilised people who believed in the values of justice and peace,”

The talks, he said, will be based on preserving the security of Iraq, supporting the state and the rule of law

We invite all the different political factions, youth, protesters and opponents of the government to the table to hold the dialogue,” he said.

Political factions and parties must “give priority to the interests of the homeland to prepare for the success of early elections and to give our people the opportunity to trust the state and the democratic system,” he said.

“To reach a final agreement and develop radical solutions to the problems of the Kurdistan Region with the federal Iraqi government in accordance with the constitution,” Mr Barzani said.