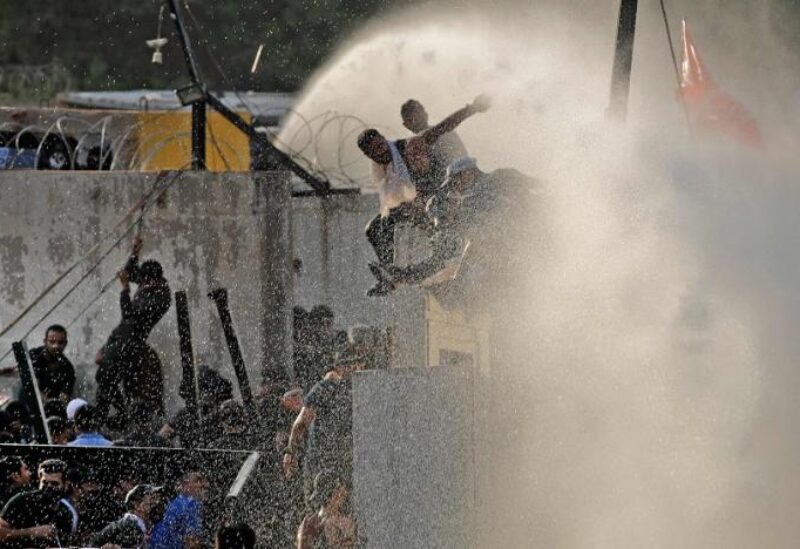 Security forces use a water cannon to prevent supporters of the Coordination Framework from entering the capital Baghdad's high-security Green Zone on August 1, 2022, during a counter-protest against Sadr's loyalists who have been occupying parliament.

Thousands of Iraqis took to the streets of Baghdad Monday in counter-protests as rival supporters of Shiite Muslim cleric Moqtada al-Sadr extended their occupation of parliament into a third day.

Almost 10 months after Iraqis went to the polls, a political standoff pits two key factions of the Shiite political scene, between the populist Sadr with a devoted following of millions, and the pro-Iran Coordination Framework.

“The people will not allow a coup,” read placards held by supporters of the Coordination Framework as they gathered on a main street leading to the Green Zone, the home of parliament, which Sadr’s supporters have been occupying since Saturday.

Police fired water cannon at crowds in a bid to prevent them from crossing a bridge leading to the Green Zone, inside which thousands of Sadr supporters maintained their protests, waving flags and carrying placards of their leader.

Sadr’s supporters on Saturday breached the normally high-security Green Zone — also home to government buildings and embassies — in protest at the prime ministerial nomination by the Coordination Framework.

On social media, followers of the Coordination Framework urged supporters not to enter the Green Zone, saying their objective was to “defend the state and its legitimacy”.

In this case, the protracted political deadlock has left the country without a government, a new prime minister or a new president.

Sadr’s massive mobilization of supporters in recent weeks has underscored the political clout of the firebrand preacher, who once led a militia against American and Iraqi government forces.

Hadi al-Ameri, who heads a faction of the PMF, repeated a call on Monday for “constructive dialogue enabling solutions to be found to points of contention”.

He warned against “an atmosphere of media escalation, sparked by statements and counter-statements calling for mass mobilizations that could get out of control and lead to violence”.

Iranian foreign ministry spokesman Nasser Kanani said Tehran respects “the choice of the Iraqi people”, and that “dialogue is the best way to solve the internal problems of Iraq”.

‘Government of the corrupt’

Sadr’s 73 lawmakers had made up the biggest group of parliament’s 329 lawmakers, but they were unable to cobble together a government.

In June they quit, a move that made their pro-Iran rivals the largest bloc in the legislature.

But the Sadrist camp was outraged by the Coordination Framework’s recent nomination of former minister Mohammed Shiya al-Sudani for premier, prompting them to occupy parliament on July 30 for the second time last week.

On Sunday, the mercurial Sadr called on “everyone… to support the reformist revolutionaries”.

He lauded a “spontaneous revolution in the Green Zone — a first step”, he said, towards “an extraordinary opportunity for a fundamental change”.

The Coordination Framework described the appeal as “a call for a coup against the people, the state and its institutions”.

In the legislature’s entrance hall on Monday, followers of Sadr chanted slogans.

“We want to get rid of the government of the corrupt,” said protester Zaher al-Atabi. “From 2003 until now, those who have run the country have done nothing to develop public services, no health system, no education.”

But while the cleric’s supporters see him as cracking down on graft, Sadrist supporters hold posts at the highest levels of government ministries — and opponents accuse them of being just as corrupt as Iraq’s other political forces.