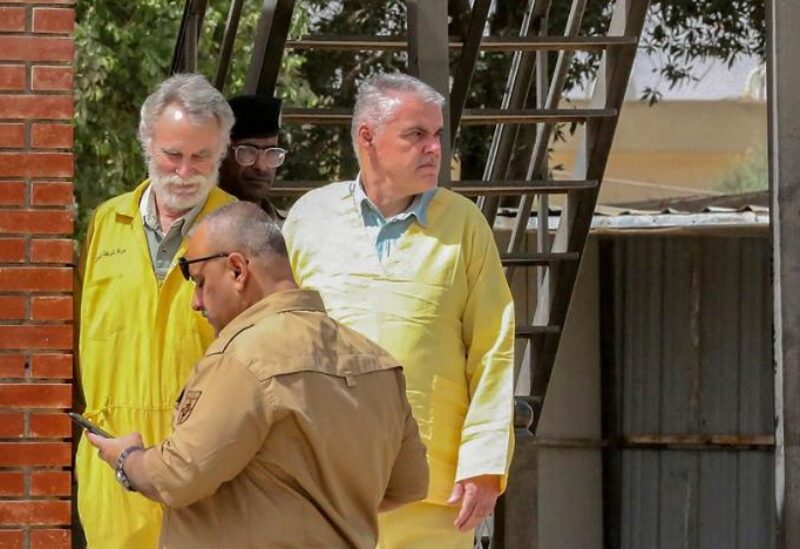 In this file photo taken on May 22, 2022 James Fitton, 66, a retired British geologist (L) and Volker Waldmann, 60, a Berlin psychologist, are dressed in the yellow uniform of detainees as they are arrive at a courthouse in the Iraqi capital Baghdad, where they are being tried over ancient pottery shards, considered by the Iraqi authorities as antiquities, found in their luggage at the airport.

An Iraqi court has overturned the conviction and 15-year sentence handed to a British pensioner last month for antiquities smuggling, the retiree’s lawyer said Tuesday.

The conviction of James Fitton has been “overturned today by the Court of Cassation and my client will soon be free”, lawyer Thaer Saoud told AFP.

“We are very pleased by the decision, but we are still waiting for his release,” his son-in-law, Sam Tasker, told AFP in a phone call.

Fitton had been charged under a 2002 law against “intentionally taking or trying to take out of Iraq an antiquity”.

He stood trial alongside German national Volker Waldmann, who was acquitted. Both men had pleaded not guilty.

According to statements from customs officers and witnesses, Fitton’s baggage contained about a dozen stone fragments, pieces of pottery or ceramics.

When the judge in the original trial asked Fitton why he tried to take the artifacts out of Iraq, the retired geologist cited his “hobby” and said he did not mean to do anything illegal. But the judge concluded there was criminal intent.

The maximum penalty for the offense is death by hanging, but Fitton was sentenced to 15 years because of his “advanced age”, the judge in the original trial said.

Fitton’s lawyer launched the appeal just over a month ago.

The case comes at a time when the war-ravaged country, whose tourism infrastructure is almost non-existent, is tentatively opening to visitors.