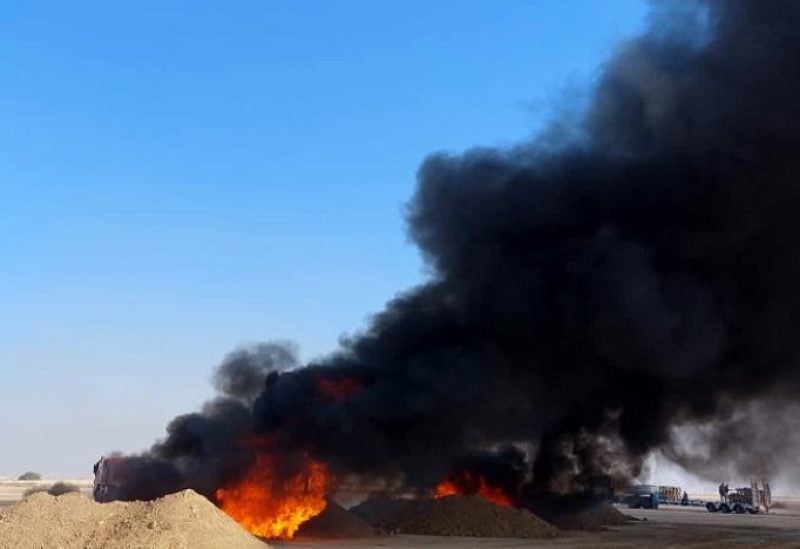 Fire and smoke rising from the place of destruction of confiscated drugs near Baghdad, Iraq, 18 December 2022. (EPA)

Iraq on Sunday burnt some six tons of illegal drugs including vast piles of cannabis, captagon and cocaine, in what officials said was the largest destruction for over a decade.

Government officials, wearing white coveralls and face masks, piled the drugs in holes dug into the sand, doused them with fuel and set them on fire.

Health Minister Saleh al-Hasnawi, speaking at the event outside a military base near the capital Baghdad, said it was the first “destruction operation of this magnitude” since 2009.

The drugs had been seized by “forces at border crossings” and other sites in Iraq, he said, with some of them stored for several years.

Security forces have intensified narcotics operations in recent years with near-daily announcements of drug seizures and arrests of traffickers.

Vast plumes of black smoke rose into the sky as the stocks were set on fire, which included 350 kilograms (770 pounds) of cocaine and 54 million pills — including five million pills of the amphetamine-type stimulant captagon, a government official said.

Quantities of crystal methamphetamine and hashish were also destroyed.

The majority of the destroyed drugs originated from Iran, but Lebanon and neighboring Syria were also sources, the government official said.

While some drug traffickers use Iraq as a transit point, the country has also seen an explosion in domestic sales and consumption in recent years.