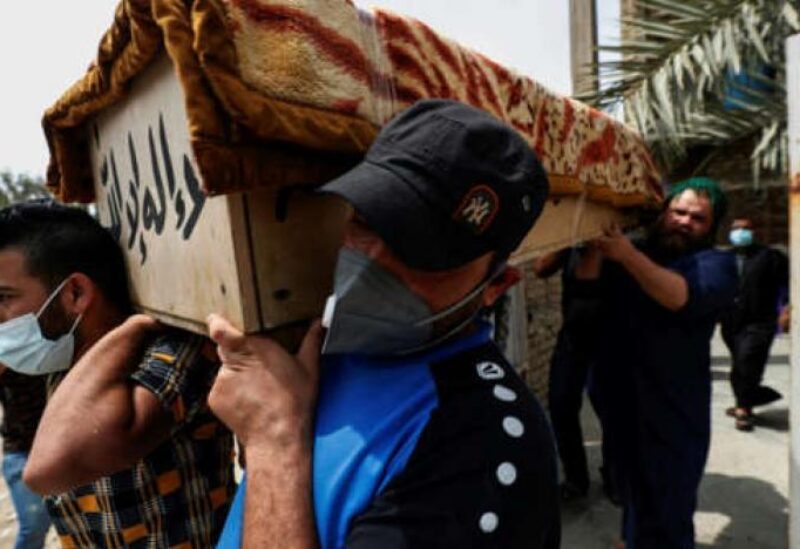 The death of over 80 people in a Baghdad Covid-19 hospital fire was seen by Iraqis Sunday as more proof of the deadly consequences of mismanagement and corruption.

Iraqis, some of whom evacuated the injured themselves, blamed Health Minister Hassan al-Tamimi, who was suspended Sunday, with calls for him to be sacked resounding across social media.

An official with the Iraqi Human Rights Commission said 28 of those killed were patients who were taken off critical ventilators to escape the flames.

The evacuation was slow, painful and chaotic, with patients and their relatives crammed into stairwells as they scrambled for exits.

President Barham Saleh tweeted on Sunday “the tragedy at Ibn al-Khatib is the result of years of erosion of state institutions by corruption and mismanagement”.

A doctor at the hospital said that “in the whole Covid intensive care unit, there were no emergency exits or fire prevention systems”.

Witnesses and doctors told AFP many bodies had yet to be identified, the remains too charred by the intense flames.

These issues were raised in a 2017 public report on the Iraqi health sector, exhumed overnight in the wake of the fire by the country’s human rights commission.

“It’s mismanagement that killed these people,” the doctor added, who, on condition of anonymity, angrily listed the hospital’s many shortcomings.

“Managers walk around smoking in the hospital where oxygen cylinders are stored,” he said. “Even in intensive care, there are always two or three friends or relatives at a patient’s bedside”.

And, he added, “this doesn’t just happen at Ibn al-Khatib, it’s like this in all the public hospitals”.

“When equipment breaks down, our director tells us not to report it,” said a nurse, in another hospital in Baghdad.

“He says it would give a bad image of his establishment, but in reality, we have nothing that works.”

These institutions — which until the 1980s were the pride of Iraq, known across the Arab world for its free, high quality public health services — are now seen as an embarrassment by many.

Their equipment is outdated, staff are poorly trained and buildings crumbling.

In Iraq, the health sector only accounts for two percent of the budget, despite the country being one of the most oil-rich in the world.

According to the World Health Organization (WHO), Iraq only has 13 hospital beds and eight doctors for every 10,000 people. Forty years ago, there were 19 beds per person.

Moreover, with corruption rife and the drug market unregulated, speculation has driven prices through the roof.

From oxygen cylinders to vitamin C tablets, prices have risen threefold or more since the start of the coronavirus pandemic.

Many Iraqis have long opted to go abroad for operations and treatment, mainly to neighboring Iran and Syria, where currency devaluations in recent years have upped their purchasing power.

For Iraqis, thousands of whom protested for months starting in October 2019 against widespread corruption, the breakdown of public services is the direct result of years of nepotism and political self-preservation.

On Sunday, Iraqis questioned if the suspended health minister would be sacked, because he is backed by the powerful Shiite Muslim leader Moqtada Sadr.

Local and hospital officials have already been suspended over the fire and are being questioned, but they are only scapegoats, angry social media users say.

In the face of an intransigent status quo and leaders they consider “corrupt” and “incompetent”, Iraqis have long fended for themselves.

As the fire raged Sunday, it was young men, bare-chested with their shirts as face masks against the acrid smoke, who pulled the injured from the burning building, loaded ambulances and helped survivors escape.