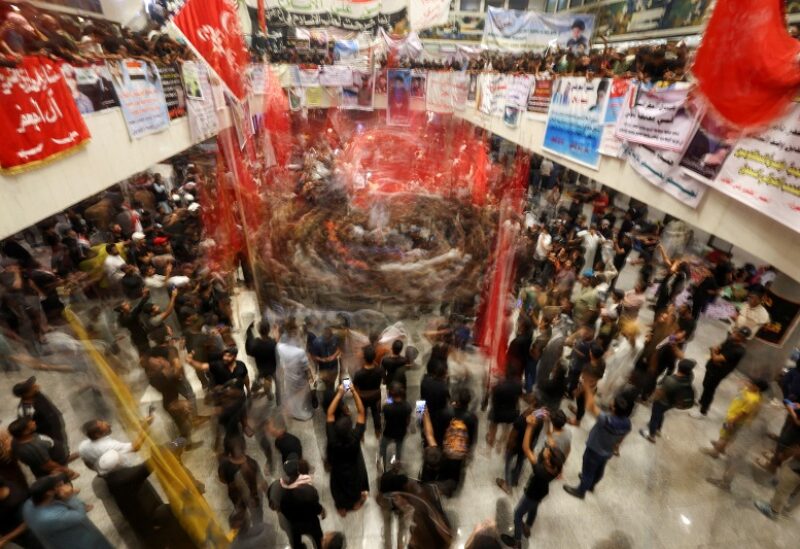 Supporters of Iraqi populist leader Muqtada al-Sadr gather during a sit-in at the parliament building, amid political crisis in Baghdad, Iraq August 4, 2022. REUTERS/Alaa Al-Marjani TPX IMAGES OF THE DAY

Once again and in a new power play, Iraq’s Shiite cleric Moqtada Al-Sadr called for traditional Friday prayers to take place on a vast square inside the Green Zone where his followers have occupied parliament for seven days.
A similar call from Al-Sadr in mid-July drew hundreds of thousands of Muslim worshippers to Sadr City, a Baghdad district named after his assassinated father, amid tensions between his political bloc and a rival Shiite faction that is backed by Iran.
The latest mass-prayer call by Al-Sadr, a longtime political and religious force in the war-scarred country, follows his demand for early elections — a possibility that the rival bloc says it is conditionally open to, despite the last national polls only taking place less than 10 months ago.
Months of post-election negotiations between Al-Sadr’s bloc — the largest in parliament — and other factions failed to lead to agreement on a new government, prime minister and president.
Al-Sadr’s bloc emerged from the October polls as the biggest parliamentary faction, but still far short of a majority.
In June, his 73 lawmakers quit in a bid to break the logjam. That led to a rival Shiite bloc, the pro-Iran Coordination Framework, becoming the largest in parliament.
The Coordination Framework’s nomination of former cabinet minister Mohammed Shia Al-Sudani as prime minister angered the Sadrists and triggered their occupation of the legislature.
On Wednesday, Al-Sadr called for new polls, and his adversaries in the Coordination Framework on Thursday night said they were conditionally open to that idea.
In a brief statement, the Coordination Framework said it “affirms its support to any constitutional way to resolve the political crises and realize the interests of the people, including early elections.”
But “a national consensus on the question and providing a safe environment” were pre-requisites for such polls, it said.
Above all, it stressed the importance of “not disrupting the functioning” of constitutional institutions — a clear reference to the occupation of parliament by Al-Sadr’s followers.
The Coordination Framework includes lawmakers from the party of former prime minister Nuri Al-Maliki, a longtime foe of Al-Sadr, and the Hashed Al-Shaabi, a pro-Iran ex-paramilitary network now integrated into the security forces.
Iraq is struggling to move past decades of war, but is beset by rampant corruption, crumbling infrastructure and unemployment.