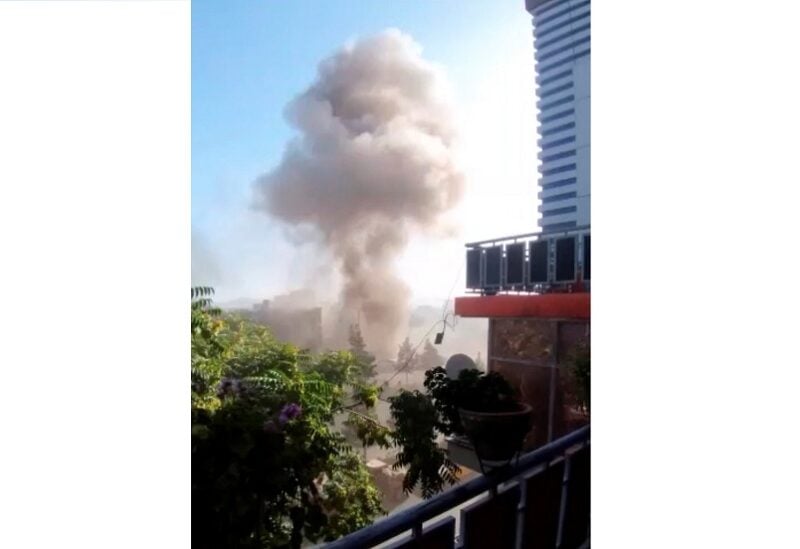 A view shows smoke rising as seen from a building in Kabul, Afghanistan June 18, 2022 in this still image obtained by Reuters from a social media video via REUTERS. THIS IMAGE HAS BEEN SUPPLIED BY A THIRD PARTY.

ISIS claimed responsibility for an attack in Afghanistan on a Sikh temple that killed one community member and a Taliban fighter, claiming it was in retribution for insults directed at the Prophet Mohammed.

In a message posted on its Amaq propaganda site, ISIS said Saturday’s attack targeted Hindus and Sikhs and the “apostates” who protected them in “an act of support for the Messenger of Allah.”

ISIS said one of its fighters “penetrated a temple for Hindu and Sikh polytheists in Kabul, after killing its guard, and opened fire on the pagans inside with his machine gun and hand grenades.”

Two were killed and at least seven others wounded in the raid.

Interior Ministry spokesman Abdul Nafi Takor said the attackers lobbed at least one grenade when they entered the temple, setting off a blaze.

The attack follows a visit by an Indian delegation to Kabul to discuss the distribution of humanitarian aid from India to Afghanistan.

Afghan and Indian media reports said the delegation discussed with Taliban officials the possibility of reopening the Indian embassy, which shut after the group seized power in August last year.

The number of bombings across Afghanistan has dropped since the Taliban returned to power, but several attacks — many targeting minority communities — have rocked the country in recent months, including several claimed by ISIS.

While ISIS is a Sunni group like the Taliban, the two are bitter rivals and greatly diverge on ideological grounds.

The number of Sikhs living in Afghanistan has dwindled to around 200, compared to about half a million in the 1970s.

Most of those who remain are traders involved in selling herbal medicines and electronic goods brought from India.

In recent months, many impoverished Sikhs including women and children took refuge in the complex that was attacked on Saturday.

The community has faced repeated attacks over the years. At least 25 people were killed in March 2020 when gunmen stormed another Sikh temple in Kabul in an attack that was also claimed by ISIS.