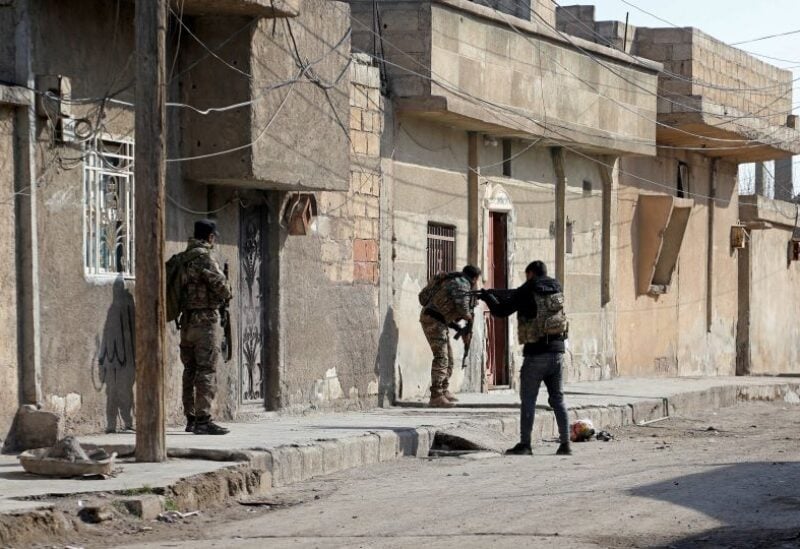 Kurdish security forces deploy in Syria's northern city of Hasakeh on January 22, 2022, amid fighting with ISIS over a prison takeover. (AFP)

Yousif Ibrahim no longer drives at night on the highways surrounding his village of Jalawla in northeastern Iraq. He is afraid of being caught up in ISIS attacks.

“The police and soldiers don’t come into our neighborhood very much anymore.” If they do, they will be fired by extremists,” warned the 25-year-old, who works as a seafood seller at a local market.

According to a dozen security officials, local leaders, and citizens in northern Iraq, over three years after the organization lost its final bastion, ISIS radicals are re-emerging as a lethal menace, abetted by a lack of central control in many places.

ISIS is no longer the powerful force it once was, but terrorist groups, many of which operate independently, have survived throughout a large expanse of northern Iraq and northeastern Syria, and in recent months they have conducted increasingly audacious operations.

“Daesh [ISIS] isn’t as powerful as it was in 2014,” said Jabar Yawar, a senior officer in Iraq’s northern autonomous Kurdistan region’s Peshmerga forces.

“Its resources are minimal, and there is no strong shared leadership,” he said to Reuters in Sulaimaniya. “However, as long as political conflicts aren’t resolved, ISIS will return.”

Some fear that this is already happening.

According to security sources, ISIS carried out one of its worst operations against the Iraqi army in years in late January, killing 11 troops in a hamlet near Jalawla.

On the same day, its fighters assaulted a Syrian jail controlled by a US-backed Kurdish force in an attempt to rescue captives loyal to the organization.

It was ISIS’s largest strike since the fall of its self-proclaimed caliphate in 2019. At least 200 convicts and terrorists, as well as 40 Kurdish forces, 77 prison guards, and four civilians, were murdered.

Rivalries between armed factions, say officials and civilians in northern Iraq and eastern Syria, are to blame for much of the violence. When Iraqi, Syrian, Iranian, and US-led troops declared ISIS defeated, they clashed across the region it had governed.

Now, militants supported by Iran are attacking US soldiers. Turkish military have been bombing Kurdish separatist insurgents. A territorial conflict between Baghdad and Iraq’s autonomous Kurdish region rages on.

The conflicts are eroding security and decent administration, resulting in the kind of disarray that ISIS used to thrive on.

For Ibrahim, that means passing through checkpoints staffed by Iraqi army and Shia Islam paramilitaries to get to work in a town previously held by Kurds.

According to local officials, ISIS terrorists hide out in the rural fields between each military position.

A similar trend can be seen across the 400-mile strip of mountains and desert that runs from northern Iraq and into Syria, where ISIS formerly reigned supreme.

In several areas of Iraq where ISIS operates, the major conflict is between the government in Baghdad and the autonomous northern Kurdish region, which is home to vast oil riches and vital terrain claimed by both parties.

Terrorists have carried out the bloodiest strikes in Iraq in recent months in these places. Dozens of troops, Kurdish fighters, and locals have been slain in violence blamed on terrorists loyal to the organization by local officials.

ISIS fighters, according to Yawar, exploit the no-land man’s between Iraqi army, Kurdish, and other checkpoints to regroup.

“Gaps between the Iraqi army and the Peshmerga might be 40 kilometers (25 miles) large,” he claimed.

According to Mohammed Jabouri, an Iraqi army officer in the Salahuddin area, the terrorists often operate in groups of 10-15 persons.

There are locations where neither the Iraqi army nor Kurdish troops can access to pursue them due to a lack of agreement over territorial control, he noted.

“That’s where Daesh [ISIS] is operating,” he said over the phone to Reuters.

In principle, Iraqi state paramilitary troops linked with Iran should cooperate with the Iraqi army, but according to certain local authorities, this does not always happen.

“The issue is that local commanders, the army, and the paramilitaries… don’t always accept each other’s authority,” said Ahmed Zargosh, mayor of Saadia, a town in contested territory.

“It implies ISIS terrorists will be able to operate in the gaps.”

Zargosh lives outside the town he governs because he fears being assassinated by ISIS members if he stays there at night.