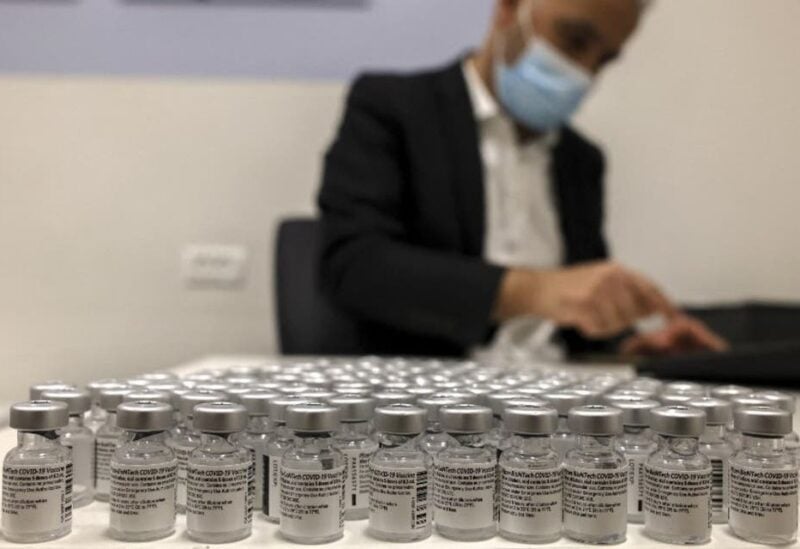 A health worker arranges vials of the Pfizer-BioNtech COVID-19 vaccine at the Clalit Health Services in the Palestinian neighbourhood of Beit Hanina, in the Israeli-annexed East Jerusalem on March 2, 2021. (AFP)

Israel is in talks with other countries about a deal to unload its surplus of Pfizer/BioNtech COVID-19 vaccines, doses of which are due to expire by the end of July, a health ministry official said on Sunday.

Hezi Levi, the ministry’s director-general, did not provide details about the number of doses Israel was looking to hand over in an apparent swap arrangement.

In an interview with Radio 103 FM, he confirmed that such a deal had been discussed with Britain last week but said an agreement had not materialized and was “a thing of the past.”

Israel’s Haaretz newspaper put the amount of doses at about 1 million.

“We are negotiating with other countries,” Levi told Radio 103 FM, without naming them. “We are dealing with this day and night.”

He said the doses expire on July 31 and that any deal would have to win Pfizer’s approval.

A Pfizer spokesperson said the company “is happy to discuss potential donations requests of the Pfizer/BioNTech COVID vaccine between governments on a case-by-case basis, particularly if this helps ensure the vaccine is used to protect people from this disease.”

Last month the Palestinians rejected about a million doses from Israel, saying they were too close to their expiry date.

Israel launched in December one of the world’s fastest vaccine drives and has since vaccinated nearly 90 percent of people over the age of 50, a group considered to be at the highest risk from the coronavirus.

Overall, however, around a fifth of all eligible Israelis have not yet had the vaccine, according to health ministry data.

With infections falling from more than 10,000 daily cases in January to single digits, Israel, with a population of 9.3 million, has dropped nearly all coronavirus curbs.

But an uptick of cases that began in mid-June, attributed to the more contagious Delta variant, may bring some restrictions back, Levi said.

Vaccination rates peaked in January and gradually fell until June, when 12 to 15-year-olds were made eligible for the jab. Delta’s spread, particularly among schoolchildren, has spurred parents to get their children inoculated and the rate has increased five-fold since early June.

Levi said Pfizer’s vaccine was about 85-88 percent effective against the delta variant, a high figure but lower in comparison with its effectiveness against other strains.

He based that figure on a British study as well as recent research by the health ministry. A ministry spokesperson did not immediately provide more details about the study.