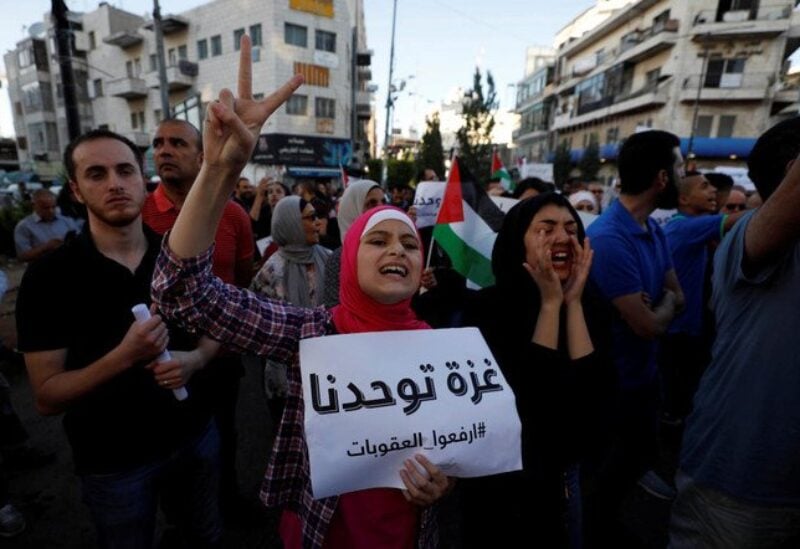 A Palestinian died after being shot in the chest by Israeli troops and at least 46 others were injured in the occupied West Bank on Tuesday.

The incidents took place during a march by Palestinians against Israeli air strikes on Gaza, the Palestinian Ministry of Health said.

Mohammad Hamidah, 25, died of gunshot wounds near the entrance of Al Bireh, near Ramallah.

The Israeli military said two soldiers were injured by gunfire during the unrest.

The ruling Fatah party, which is headquartered in Ramallah and is headed by Palestinian leader Mahmoud Abbas, called for peaceful strikes and protests which would include the closure of “all economic, commercial and educational establishments” in the West Bank and east Jerusalem, according to the official Wafa news agency.

Shops were shuttered in the streets of Jerusalem’s old city, Ramallah, Bethlehem, Nablus and other parts of the Palestinian territories on Tuesday during the nationwide strikes as demonstrators carried signs in solidarity with the people of Gaza and waving Palestinian flags.

Over a week of Israeli raids on Gaza have so far killed 212 Palestinians, including 61 children, and Hamas strikes on Israel have claimed 10 lives in Israel. At least 3,150 rockets had been fired into Israel as of Monday, and more than 820 targets had been hit by Israel in Gaza, according to the Israeli military.

The ensuing #StrikeForPalestine and Arabic version of the hashtag were trending on Twitter and other social media platforms on Tuesday.

One of the Arabic hashtags was shared over 18,000 times and the English term shared almost 200,000 times as of Tuesday 1pm local time, according to social media monitoring tool Brand Mentions.

The Arab High Follow-Up Committee, an umbrella organisation representing Arab-Israelis, supported the strike which it said was in protest against “obsessive arrests conducted by the Israeli police and intelligence units against activists”.

The committee called on protesters to remain “peaceful” and urged the immediate release of political prisoners.

Yara Hawari, a senior fellow at the Al Shabaka Palestinian policy network said the strikes were aimed at maintaining “the unprecedented moment of popular resistance” among the Palestinians.