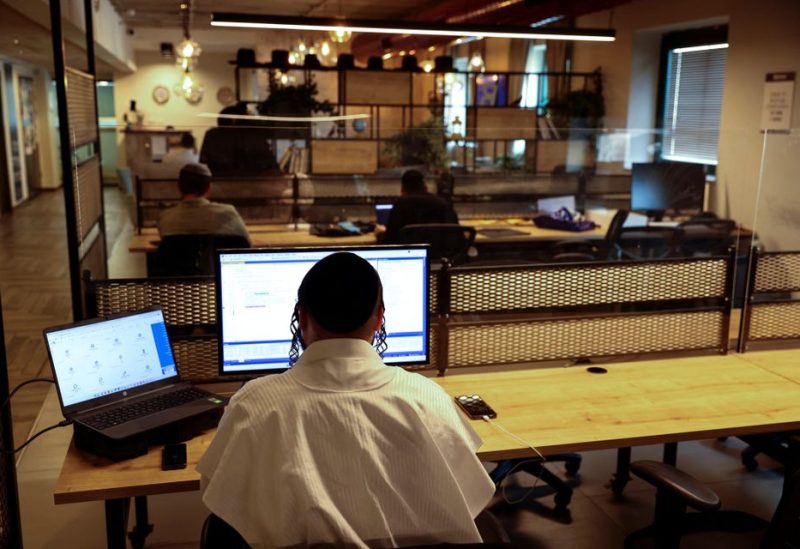 Men work at the offices of a co-working space run by Bizmax, an innovation center for Ultra-Orthodox Jewish male residents of Jerusalem, January 3, 2023. REUTERS/Ronen Zvulun

Prime Minister Benjamin Netanyahu’s new nationalist-religious coalition may bring with it heavy economic costs after he promised to protect increasingly expensive benefits for ultra-Orthodox families that allow many among them to avoid working.

Analysts said the extra spending, if Netanyahu sticks to his pledges, will make the battle against rising inflation tougher amid a global economic slowdown.

It also risks further entrenching the traditional schooling arrangements in the fast-growing ultra-Orthodox community that limits the study of practical skills as men focus on scripture while they live off benefits rather than finding jobs.

The ultra-Orthodox community makes up 13% of Israel’s population, but with an average 6.5 children per family, they may make up a third by 2065, official projections show.

Although more ultra-Orthodox men have been seeking work, promises of food stamps, housing benefits and a jump in stipends for religious seminary students could reverse this, Malach said.

The central bank and economists have long said the economy would suffer unless more ultra-Orthodox men worked for a living.

“A smaller amount of people is going to have to bear the tax burden,” Andrew Abir, deputy governor of Israel’s central bank, told Reuters. “And that will become more difficult 10-15 years down the road.”

Benefits may make it easier for many Haredi men to stay out of work, but their scripturally centred education can create challenges even if they do seek a job. Some boys in Haredi schools do not study maths, English, science or technology. Some community members say any education gaps can be filled later.

“We cannot cave to a group that does not teach its children what they need to live in a modern society and work in a modern economy,” said economist Dan Ben-David of the Shoresh Institution for Socioeconomic Research.

Members of the Haredi community say the scriptural focus of their studies are safeguarding millennia-old traditions and accuse opponents of scaremongering about the economic impact.

“All these prophecies of Israel’s economy collapsing are untrue,” Yaakov Asher, a lawmaker in coalition partner United Torah Judaism, told reporters. “Give us 100 days grace and stop scaring the public.”

Haredim are a tight-knit community that considers studying the Torah, or Jewish laws and scriptures, as sacrosanct and says it has sustained the Jewish people through their history.

“Our people went through the Holocaust, disasters, Inquisition, crusades and then finally returned to their land – that’s because we always kept Torah study,” UTJ’s Moshe Gafni told a municipal conference last month.

One of the coalition’s concessions to the ultra-Orthodox parties was scrapping a tax on single-use plastics. One study found the Haredi community used plasticware three times more than the rest of Israel because of their large families, low incomes and many not owning a dishwasher.

The coalition deals also include ways to encourage employment, such as affirmative action to employ members of the ultra-Orthodox community in the public sector.

But it promised more cash for ultra-Orthodox schools and greater autonomy over their curriculums, while eliminating the previous government’s moves to slash budgets of schools that do not teach basic subjects and increase funds to those that do.

In 2003, Netanyahu cut welfare benefits when he was finance minister at a time when just a third of ultra-Orthodox men worked. The proportion in employment began rising but stagnated again from 2015 when Netanyahu also led a government that included ultra-Orthodox parties.

The rise had resumed under the previous cabinet which had no ultra-Orthodox coalition members. A study by the Israel Democracy Institute think tank said the number of ultra-Orthodox men in employment climbed by 2.5 percentage points in 2022.

The new government is still expected to continue support for professional training programmes that aim to bring more members of the ultra-Orthodox community into the growing technology sector.

“They can build companies. They have talent,” said Moshe Friedman, founder of KamaTech, which is working with technology firms to improve any education gap and boost ultra-Orthodox workers in the industry. “We just need to give them an opportunity.”