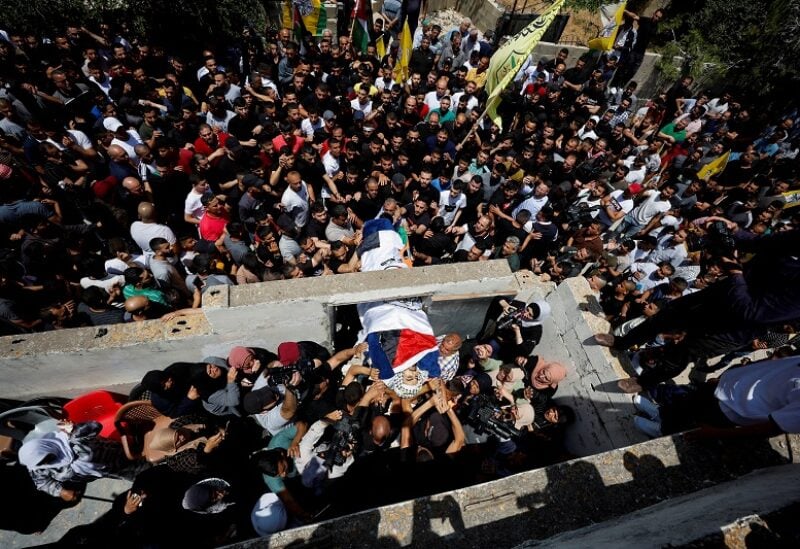 SENSITIVE MATERIAL. THIS IMAGE MAY OFFEND OR DISTURB Mourners carry the body of Palestinian Bilal Kubha who was killed during clashes in an Israeli raid, during his funeral in Ya'bad in the northern Israeli-occupied West Bank June 2, 2022. REUTERS/Mohamad Torokman TPX IMAGES OF THE DAY

A Palestinian was shot and killed by Israeli forces in the occupied West Bank early on Thursday. He was the third Palestinian to be killed in a little over 24 hours at a time of heightened Mideast tensions.

The Israeli military said forces operating in the Dheisheh refugee camp in the West Bank city of Bethlehem opened fire after being pelted with rocks and makeshift bombs. The Palestinian Health Ministry said Ayman Mheisen, 29, was killed.

Late on Wednesday, Israeli forces entered the village of Yabed, near the northern West Bank city of Jenin, to destroy the family home of a slain Palestinian attacker who had methodically gunned down five people in the Israeli city of Bnei Brak in March.

The military said Palestinians attacked the soldiers with stones and firebombs, and that the troops exchanged gunfire with Palestinian militants. The Palestinian Health Ministry said Bilal Kabaha, 24, was killed. Hamas said he was one of its fighters.

Video released by the Israeli military showed soldiers preparing the house for demolition and an explosion ripping through the three-floor building and lighting up the night sky.

Israel routinely demolishes the homes of slain or captured Palestinian militants, saying it serves as a deterrent, despite an internal army report from 2004 that questioned its effectiveness. The Palestinians and rights groups say it amounts to collective punishment.

The Israeli rights group HaMoked said the attacker’s parents and grandmother, as well as a brother who is a minor, were living in the home. It filed a petition against the demolition that was rejected by Israel’s Supreme Court.

Earlier on Wednesday, Israeli troops in the southern West Bank killed a Palestinian woman who they say approached them with a knife.

The West Bank is home to nearly 3 million Palestinians and has been under military rule since Israel captured the territory in the 1967 Mideast war.

The Palestinians want the West Bank to form the main part of their future state. The peace process collapsed more than a decade ago.

In recent months, Palestinians have carried out a wave of attacks against Israelis that have left 19 people dead. The military has launched near-daily operations across the West Bank that it says are aimed at breaking up militant networks to prevent more attacks.

Clashes at a flashpoint holy site in Jerusalem and the killing of a well-known Palestinian-American journalist have further heightened tensions. The Palestinians and witnesses say Shireen Abu Akleh was killed by Israeli fire, while Israel says it’s not clear if soldiers or Palestinian gunmen fired the deadly bullet.

The Palestinian Health Ministry said 62 Palestinians have been killed by Israeli forces since the start of the year. It does not differentiate between civilians, militants and those who were killed after carrying out deadly attacks.

The ministry’s count includes Abu Akleh, as well as an unarmed woman and two people who appear to have been bystanders during clashes.