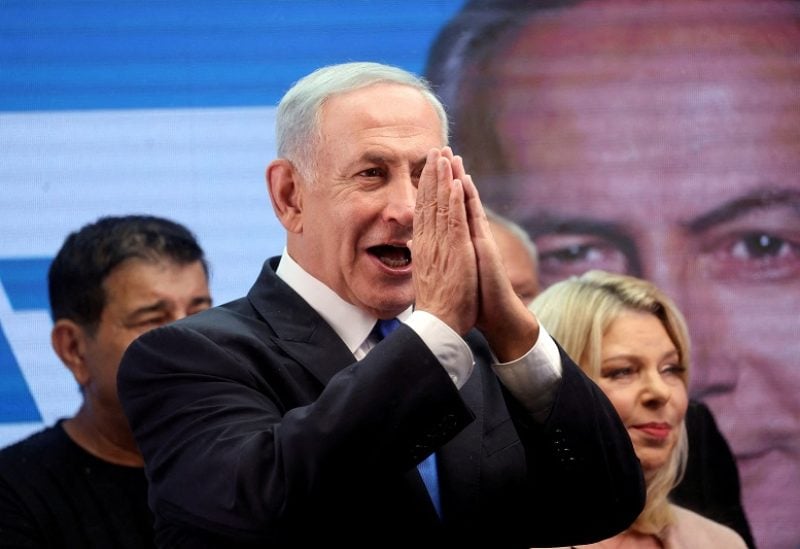 Leading what analysts describe as the most right-wing government in the country’s history, Benjamin Netanyahu will return to power in Israel on Thursday.
Senior security and law enforcement officials have already voiced concern over its direction, as have Palestinians.
“It becomes for Netanyahu’s partners a dream government,” Yohanan Plesner, president of the Israel Democracy Institute think-tank, said.
“And one side’s dream is the other side’s nightmare,” he said, adding: “This government is expected to take the country in a completely new trajectory.”
Netanyahu, 73, who is fighting corruption allegations in court, already served as prime minister longer than anyone in Israeli history, including a record 12-year tenure from 2009 to 2021 and a three-year period in the late 90s.
He was ousted from power in the spring of 2021 by a motley coalition of leftists, centrists and Arab parties headed by Naftali Bennett and former TV news anchor Yair Lapid.
It didn’t take him long to come back.
Netanyahu will present his new government to the Israeli parliament for a ratification vote at 11:00 a.m.
Following the election on November 1, Netanyahu entered into negotiations with ultra-Orthodox and extreme-right parties, among them Bezalel Smotrich’s Religious Zionism formation and Itamar Ben Gvir’s Jewish Power party.
Both have a history of inflammatory remarks about the Palestinians.
They will now take charge respectively of Israeli settlement policy in the West Bank, and of the Israeli police, which also operate in the territory occupied by Israel since 1967.
Even before the government was sworn in, the majority parties passed laws that would allow Aryeh Deri, a key ally from the ultra-Orthodox Shas party, to serve as a minister despite a previous guilty plea to tax offenses.
They also voted to expand powers of the national security minister, a portfolio set to be handed to Ben Gvir who will have authority over the police.
The assignment comes despite Attorney General Gali Baharav-Miara’s warning against the “politicization of law enforcement.”
On Monday, in a phone call to Netanyahu, armed forces chief Aviv Kochavi expressed his concerns regarding the creation of a second ministerial post in the defense ministry for Smotrich, who will oversee management of civilian affairs in the West Bank.
Israel’s ally the United States has also spoken out.
Secretary of State Antony Blinken warned that Washington would oppose settlement expansion as well as any bid to annex the West Bank.
But in a statement of policy priorities released Wednesday, Netanyahu’s Likud party said the government will pursue settlement expansion.
About 475,000 Jewish settlers — among them Smotrich and Ben Gvir — live there now in settlements considered illegal under international law.
Analysts said Netanyahu offered the extreme-right vast concessions in the hope he might obtain judicial immunity or cancelation of his corruption trial. He is charged with bribery, fraud and breach of trust, allegations he denies.
Denis Charbit, professor of political science at Israel’s Open University, said the government “is the addition of Netanyahu’s political weakness, linked to his age and his trial, and the fact that you have a new political family of the revolutionary right that we had never seen with this strength in Israel.”
Smotrich and Ben Gvir “have a very strong thirst for power” and their priority remains the expansion of West Bank settlements, Charbit said.
Ben Gvir has repeatedly visited Jerusalem’s Al-Aqsa mosque compound, the third-holiest site in Islam. It is also Judaism’s holiest, known as the Temple Mount.
Under a historical status quo, non-Muslims can visit the sanctuary but may not pray there. Palestinians would see a visit by a serving Israeli minister as a provocation.
“If Ben Gvir, as minister, goes to Al-Aqsa it will be a big red line and it will lead to an explosion,” Basem Naim, a senior official with the Islamist movement Hamas which rules the Gaza Strip, said.
Israel and Hamas fought a war in May 202l. This year, other Gaza militants and Israel exchanged rocket and missile fire for three days in August.
In the West Bank, violence has surged this year and many are afraid of more unrest.
“I think that if the government acts in an irresponsible way, it could cause a security escalation,” outgoing Defense Minister Benny Gantz said on Tuesday, expressing fear over the “extremist direction” of the incoming administration.