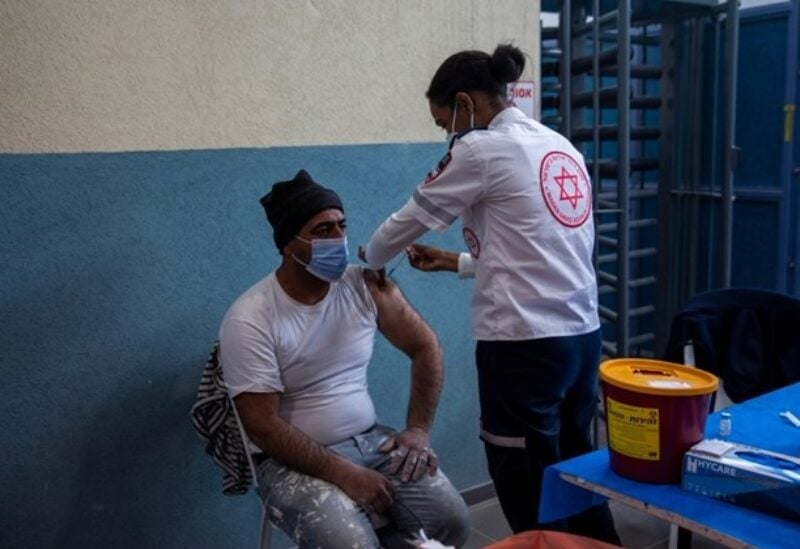 Israel launched on Monday a vaccination drive to inoculate around 100,000 Palestinians in the West Bank who hold permits to work in Jewish settlements in the occupied territory and inside the Jewish state.

Israel’s emergency medical service, the Magen David Adom, said in a statement that it was administering doses on Monday of the Moderna vaccine at spots set up at select checkpoints linking the West Bank and Israel.

Vaccinations were also taking place at centers within industrial areas connected to Jewish settlements in the West Bank.

Around 475,000 Jews live in West Bank settlements, communities considered illegal by much of the international community.

Thousands of Palestinians work in the settlements.

Palestinians in east Jerusalem, which Israel annexed following the 1967 Six Day War, have been included as part of a vaccination drive launched in December for the general Israeli population.

Israel has given 2 of the recommended Pfizer/BioNTech jabs to roughly 40% of its 9 million population.

The country took another step towards post-pandemic normality on Sunday, opening restaurants, bars and cafes to inoculated “green pass” holders.

But in the West Bank, occupied by Israel since 1967, closures are being intensified in a bid to curb the spread of coronavirus.

The governor of Ramallah on Saturday declared “a strict one-week lockdown… over a spike in daily COVID-19 cases and hospitalizations.”

Last week, the Palestinian Authority’s health ministry warned against a worrying rise in infections and hospitalizations.

Israel has faced widespread calls, including from the United Nations, to ensure vaccinations of Palestinians living under occupation in the West Bank, and those in the Israeli-blockaded coastal enclave of Gaza.

Israel has rejected those calls, insisting the PA is responsible for general inoculation in the West Bank and Gaza, which is controlled by Islamist group Hamas.

The PA has reached deals with several vaccine providers, notably the makers of Russia’s Sputnik V, but large-scale procurements have faced delays.

At least 140,000 Palestinians in the West Bank have contracted COVID-19 since the beginning of the global pandemic, 1,579 of whom have died, out of a population of 2.8 million, according to official figures.