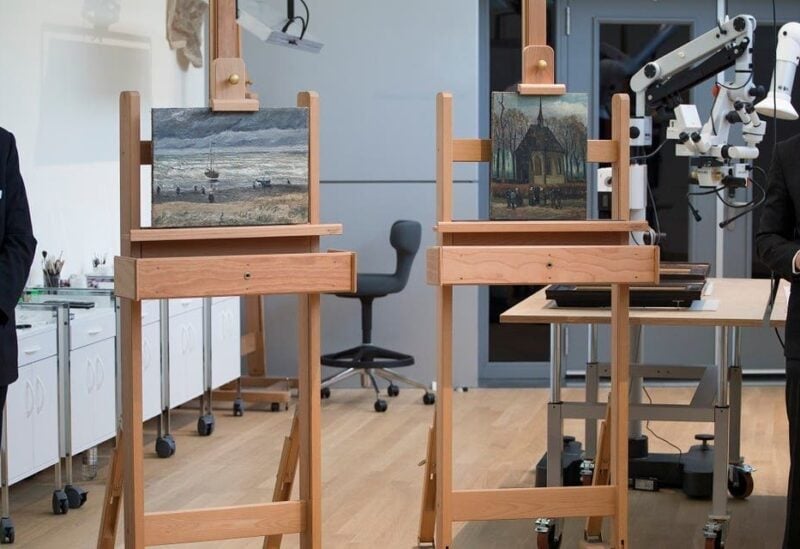 File photo of museum director Axel Ruger, (right), talks during a presentation of two restored paintings, that were stolen and went missing for 14 years before being recovered in Italy in 2016, by Dutch master Vincent van Gogh. (AP)

One of Italy’s most wanted men, an alleged top drug trafficker suspected of having bought two stolen Van Gogh paintings on the black market, has been arrested in Dubai, Naples-based police said on Thursday.

Imperiale, 46, is being held in the United Arab Emirates while Italy’s justice ministry completes extradition procedures.

Since January 2016, Imperiale has been sought by Italy for international drug trafficking as part of organized crime activity, according to the Italian interior ministry. He was considered one of Italy’s most dangerous and most wanted fugitives.

In 2016, two Van Gogh works, stolen in 2002 from an Amsterdam museum, were found stashed in a farmhouse on property owned by Imperiale in the Naples-area town of his birth, Castellamare di Stabia.

“The wealth illicitly accumulated allowed him to buy on the black market two Van Gogh paintings of unquantifiable value,” police said. They referred to the 1882 “View of the Sea at Scheveningen” and a 1884-1885 work “Congregation leaving the Reformed Church in Nuenen,’’ which had been stolen from the Van Gogh Museum in Amsterdam.

Italian financial police found the paintings wrapped in cotton sheets, stuffed into a box and hidden behind a wall in a bathroom. The artworks were discovered as part of a seizure of property from Imperiale and another reputed Camorra drug kingpin.

Police noted that Imperiale earlier this year gave an interview to Naples daily Il Mattino in which he denied any link to the paintings’ theft and claimed he bought the works because he is a passionate lover of art.

His arrest grew out of an investigation coordinated by Naples prosecutors and conducted by Naples-based police and the Financial Police’s organized crime division.