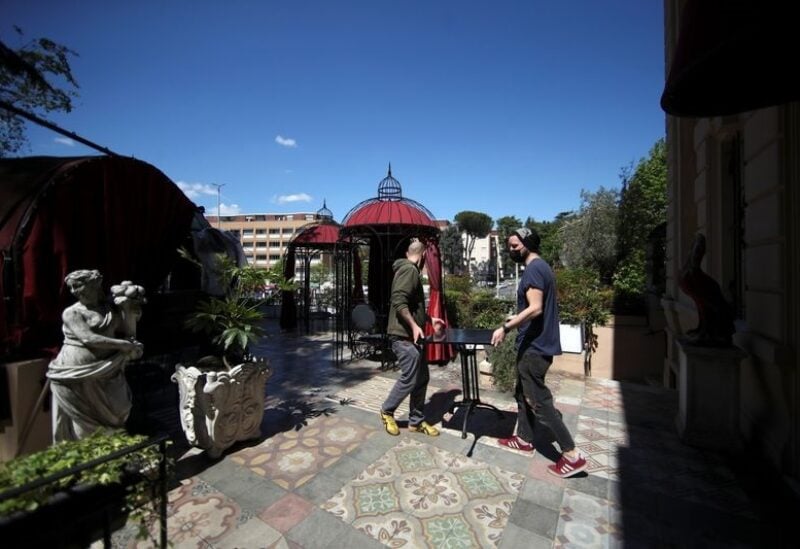 Employees of Michelin-starred "Marco Martini" carry a table as owners prepare outdoor dining in order to be ready for April 26 when restrictions to contain the spread of the coronavirus disease (COVID-19) will relax and people can dine outside, in Rome, Italy, April 23, 2021. REUTERS/Yara Nardi

Restrictions on many businesses, including restaurants, bars and cinemas, will be relaxed in many Italian regions from Monday, as the government slowly rolls back coronavirus curbs in low-infection areas.

Fourteen of Italy’s 20 regions, including Lazio, centered on Rome, and Lombardy centered on Milan, will become moderate-risk yellow zones from April 26, after weeks of being designated as higher risk orange and red zones, the health ministry said.

This means that restaurants and bars in these areas will be able to resume table service in outdoor areas, having previously been only allowed to offer takeaways, and some began setting up tables and preparing food in anticipation of the change.

Cinemas, theatres and concert halls will also be able to reopen as of Monday in the yellow areas, albeit with strict curbs on attendance. They have been closed since last October.

“Monday for me is like the first day of school,” said chef Marco Martini, who named his Rome restaurant after himself.

Italy, which has registered the second highest number of coronavirus deaths in Europe, reintroduced tough nationwide curbs last autumn when a second wave of cases hit the country.

It subsequently adopted a four-tier, color-coded system based on local infection levels, but shunted the entire nation into red or orange zones for the past six weeks to take pressure off hospitals and to let the vaccination campaign gather speed.

Italian restaurants lost some 37.7 billion euros ($45.5 billion) due to the coronavirus crisis in 2020, according to sector lobby FIPE – around 40% of their annual revenue.

A government decision to keep a 10 p.m. (2000 GMT) nightly curfew despite requests from coalition parties and regional governors to push it back to 11 p.m. has angered some restaurateurs, who had hoped for a full reopening.

People are used to having supper between around 8.30 to 9.30 p.m. in Italy, and maintaining an early curfew was expected to deter diners.

“Frankly, I would have extended the curfew at least a bit … not everyone is willing to change habits,” Martini said.