Italy asks that 4 Egypt officers be tried in Regeni case 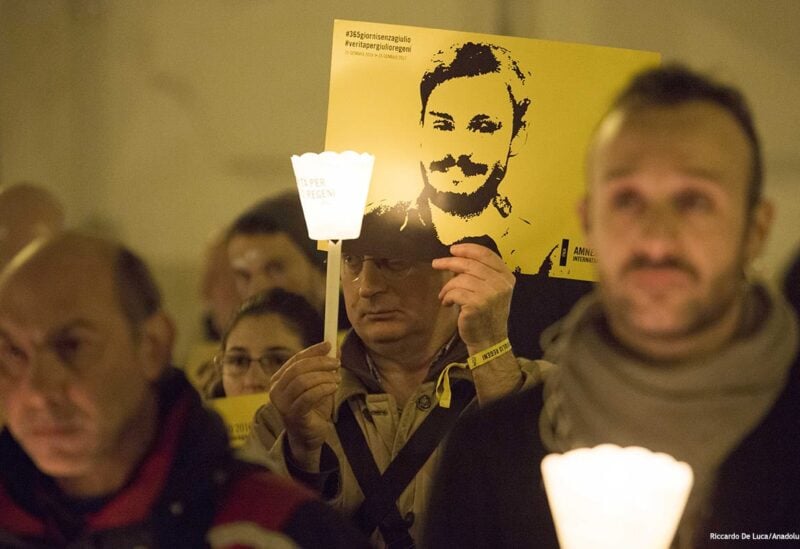 Italian prosecutors yesterday asked a judge to have four senior members of Egypt’s security services sent for trial over their suspected role in the disappearance and murder of student Giulio Regeni in Cairo in 2016, Reuters reported.

Regeni, a postgraduate student at Britain’s Cambridge University, disappeared in the Egyptian capital in January 2016. His body was found almost a week later and a post mortem examination showed he had been tortured before his death.

Italian and Egyptian prosecutors investigated the case together, but the two sides later fell out and came to very different conclusions.

The Rome prosecutors have accused four officials of the “aggravated kidnapping” of Regeni and in addition say one of them, Major Magdi Sharif, from General Intelligence, should be charged with “conspiracy to commit aggravated murder”.

Egyptian police and officials have denied any involvement in Regeni’s killing. Egyptian prosecutors said last year they “did not support” the Italian findings and asked for the accusations against the four to be removed from case documents.

Italian judicial sources say their Egyptian counterparts have not supplied the addresses of the four suspects and none of them are expected to attend any eventual trial. A source said Italy had not issued international arrest warrants for them.

A judge suspended Thursday’s preliminary hearing in the case until 25 May as one of the court-appointed defence lawyers had contracted the coronavirus and could not attend. A full trial is unlikely to start before the summer recess.

Regeni had been in Cairo to research Egypt’s independent unions for his doctoral thesis. Associates say he was also interested in the long-standing domination of Egypt’s economy by the state and military. Both subjects are sensitive in Egypt.