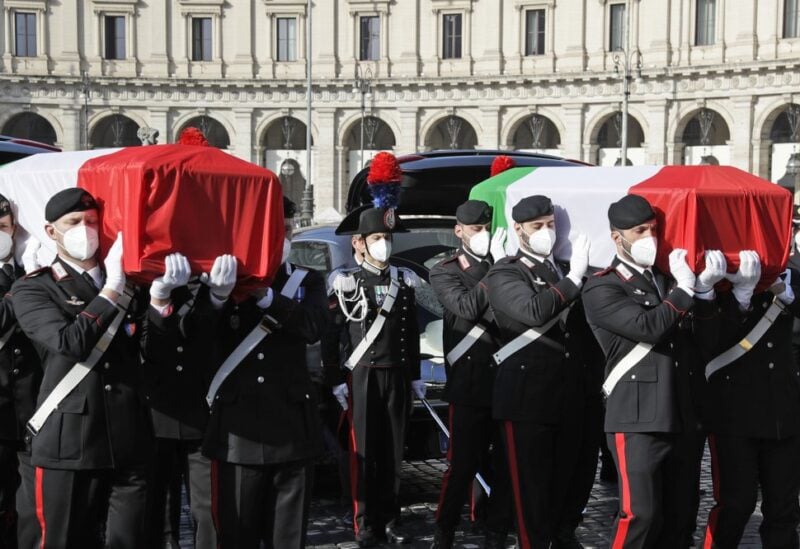 ROME: Italy paid tribute Thursday to its ambassador to Congo and his bodyguard who were killed in an attack on a U.N. convoy, honoring them with a state funeral and prayers for peace in Congo and all nations “torn by war and violence.”

Cardinal Angelo De Donatis, the pope’s vicar for Rome, presided over the solemn funeral at the Santa Maria degli Angeli basilica that was attended by Premier Mario Draghi, top lawmakers, representatives of the armed forces and relatives of the young men.

Ambassador Luca Attanasio and Carabiniere paramilitary officer Vittorio Iacovacci were killed Monday north of Goma when an armed group stopped them as they travelled in a two-car convoy to a World Food Program school feeding project. WFP’s Congolese driver, Moustapha Milambo, was also killed in the attack.

Italy has formally asked the U.N. for an inquiry into what happened amid questions about whether the U.N. security arrangements were sufficient for the mission.

In his eulogy, De Donatis decried the “stupid and ferocious” attack and said it was right that Italy, Congo and the community of nations weep over such violence that “tore Luca and Vittorio from this world.”

“Let us pray together that today is a day in which the prayer for peace in Congo and in all nations torn by various forms of war and violence is raised to heaven,” he said.

He denounced how so many Congolese feel the constant threat of danger from rebel groups “knocking at their door,” saying the country had been “cruelly devastated by violence that sees their children die every day.”

But he praised the men for working for peace and looking out for others “even at the cost of their own lives.”

The funeral, carried live on state RAI television, featured masked Carabinieri officers as pallbearers and altar servers, with a military band performing Chopin’s haunting “Funeral March” as the flag-draped coffins were carried in and out of the basilica.

After the service, the socially-distanced crowd applauded as the two hearses pulled out of the piazza carrying the coffins for burial, flanked by a police escort.