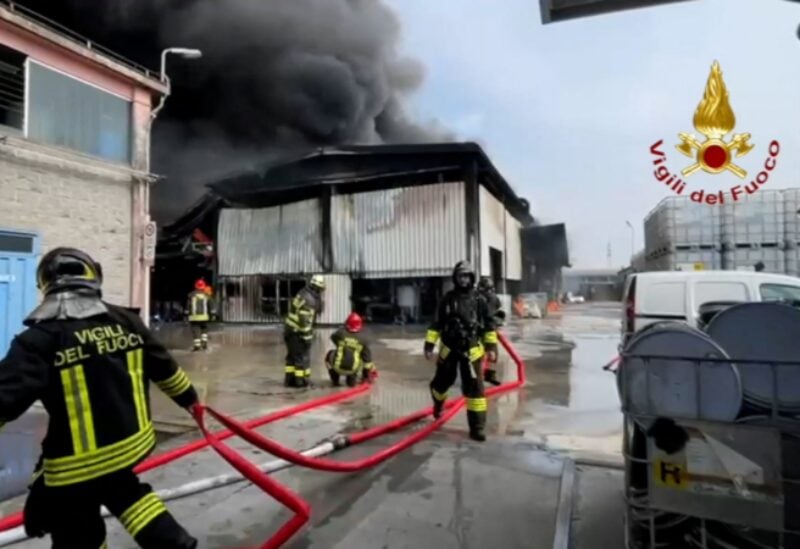 Fire brigade members work to put out a fire at the Nitrolchimica chemical plant in this still image taken from video in San Giuliano Milanese near Milan, Italy, September 7, 2022. Vigili del Fuoco/Handout via REUTERS THIS IMAGE HAS BEEN SUPPLIED BY A THIRD PARTY. DO NOT OBSCURE LOGO.

Italian media reported that more than 100 emergency workers had finally made some headway on a massive fire at an industrial compound outside of Milan late on Wednesday. However, several workers were badly injured thousands of liters of chemicals were still burning.

“The situation is quite complex due to the nature of the material, which is liquid solvents in large quantities,” the local fire was quoted as saying by Italian daily Corriere della Sera.

The fire broke out early in the morning in the town of San Giuliano Milanese, southeast of Milan at the Nitrolchimica company, which deals with solvent recovery and hazardous waste disposal.

Three people were badly injured; two of them had to be taken to the hospital. One of the victims had life-threatening burns, authorities said. About 15 people were treated for minor injuries at the scene.

“We heard an explosion. Then, immediately flames and we ran away,” one worker told the Italian press.

Witnesses said smoke could be seen from 10 kilometers (roughly 6 miles) away. Local residents have been advised to keep their doors and windows shut for the time being.

Twenty different fire brigades were called to the area, from as far away as Verona, in order to procure enough extinguishing foam to combat the blaze.

Prosecutors open probe
Initials reports suggested that the fire was accidental in origin. Prosecutors from Lodi, which has jurisdiction over San Giuliano, said it would immediately open an investigation. Possible charges could be arson by negligence or causing injury by negligence.

Arpa Lombardia, the regional office of Italy’s environmental protection service, said it was on the scene to assist in containment of dangerous chemicals. They said as of yet, no environmental catastrophe had occurred, but cautioned that the situation could change depending on the speed of the clean-up and the weather.