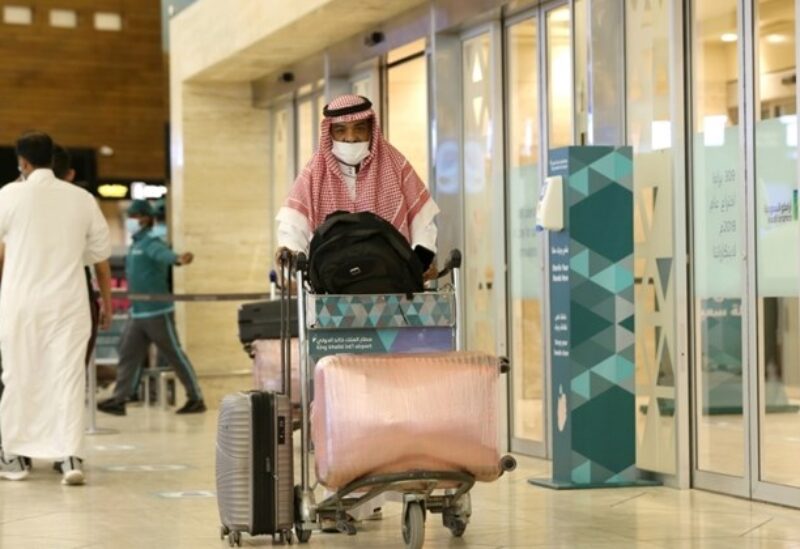 A Saudi man wearing a face mask is seen with his luggage as he arrives at the King Khalid International Airport, after Saudi authorities lift the travel ban on its citizens after fourteen months due to Coronavirus (COVID-19) restrictions, in Riyadh, Saudi Arabia, May 16, 2021. REUTERS/Ahmed Yosri

RIYADH: There was excitement but no crowds early on Monday morning at Riyadh’s international airport as Saudi Arabia lifted a ban on citizens travelling out of the Gulf state without prior permission from authorities.

Saudi nationals who have received at least one COVID-19 vaccination shot a minimum two weeks prior to travel, those who have recovered from the coronavirus disease within the last six months, and those under 18 will be allowed to travel for the first time since March 2020.

“It’s a great feeling, thank God, we are happy, especially after the difficult period we and the entire world have suffered,” said Bandar Al Nawash, a passenger waiting in the departure lounge of King Khalid International Airport.

Fellow national Faisal Al Tamimi said he had expected large crowds at the airport, but there were only a few travellers early on Monday after the suspension was lifted at 1 a.m. local time.

“I think people are worried about the coronavirus variants such as the one in India, and new developments in some countries,” Al Tamimi said.

There are 13 countries Saudi nationals are still banned from visiting without prior permission, whether through direct or indirect flights due to COVID-19 risks.

Saudi Arabia, with a population of some 30 million, reported 825 new coronavirus infections on Sunday, taking total caseload to 433,094, including 7,162 deaths.

Authorities said on Sunday more than 11.5 million vaccines had been administered in the Gulf Arab state so far.

“Thank God … today we can travel whether for tourism or for business. God willing this pandemic will be over and everyone will be able to travel,” said Jaber Al Mahadi, another traveller at the airport on Monday morning. – Reuters