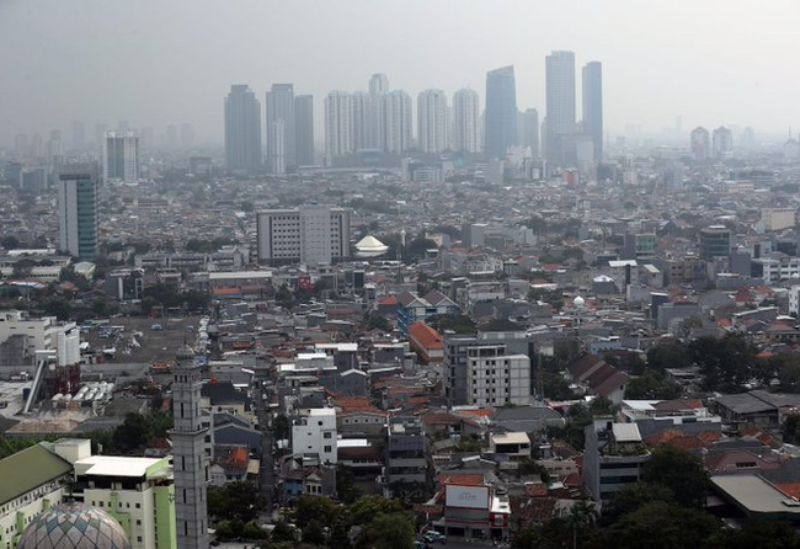 Aditho Harinugroho, unlike most people who choose to commute by car in the absence of efficient public transportation, has always relied on his motorcycle, despite having to brave congested streets and breathe extremely polluted air in Indonesia’s capital city, Jakarta.

The 36-year-old freelance cameraman travels about 30 kilometers each day from his home in East Jakarta to meet clients in the south or central parts of the Indonesian capital, and avoids the dust and pollution by wearing a facemask.

Harinugroho frequently experiences breathing issues as a result of this, particularly after traveling through regions of the city where infrastructure development work is occurring.

“The washcloth is black with soot when I clean my face. It demonstrates how dirty Jakarta’s air is, according to Harinugroho.

“It is in my best interest as a cyclist to be able to ride in clean air. This is why I filed a civil complaint in order to compel the government to enhance air quality regulations in the city and its suburbs,” he continued.

Harinugroho and 31 other plaintiffs from various backgrounds filed the lawsuit in July 2019 against the central and regional governments — the president; the ministries of environment, health and home affairs; and the governors of Jakarta and its two neighboring provinces of West Java and Banten.

The greater Jakarta region, comprising the capital and its four satellite cities, is home to about 30 million people.

The Central Jakarta District Court was expected to issue a verdict in the case on May 20 but postponed the hearing to June 10, citing insufficient documents from defendants for cross-examination purposes.

“I hope the government will enforce stricter regulations to ensure that we can have much better air quality than what we have now. It is the least we can expect,” he said.

Another plaintiff, Istu Prayogi, joined the lawsuit for health reasons after being directly impacted by the city’s polluted air.

Since 1995 and almost a decade after he moved from Central Java to Depok, West Java, on the outskirts of Jakarta, the non-smoking, 56-year-old tourism lecturer has suffered from various illnesses, including respiratory problems, headaches, high fever and blood in his urine.

In 2016, a thorax scan showed that Prayogi’s lungs were “crowded” with dirt from breathing in the polluted air, with the diagnosis saying that he was sensitive to dirty air.

“I have been wearing a face mask even indoors almost all the time since then, when it was still a strange thing to do, unlike now in the pandemic,” Prayogi told Arab News.

He said he was not surprised that the court had stalled the hearing but expressed optimism that there were “judges with a conscience” who would rule in favor of the plaintiffs.

Ayu Eza Tiara, one of the lawyers for the plaintiffs, told Arab News they are “99 percent optimistic” that they will win the case since all the evidence presented during the hearings, including by experts representing the defendants, showed that the government has been “negligent in controlling the air pollution in the greater Jakarta region.”

“If we win the case, we expect the government to respect the ruling by immediately taking actions to revise the existing regulations to control the pollution or replace them with well-researched ones, which include inputs from health experts and public participation,” she said.

Tiara added that efforts to address the situation have been ineffective and were mainly superficial “just to show that the government has done something about it.”

“We also expect the government not to stall executing the ruling in favor of the plaintiffs by appealing the ruling to the higher courts. We are not seeking financial compensation; we are just asking them to ensure we have our basic right to breathe clean air,” Tiara said.

The civil lawsuit is backed by the UN Special Rapporteur for Human rights and the Environment David R. Boyd, who submitted his amicus curiae brief to support the plaintiffs’ demand for clean air, which the government is constitutionally obliged to do.

Jakarta is a regular entry on the list of most polluted cities in the world, and despite the significant reduction in traffic imposed by mobility restrictions to curb the spread of the coronavirus disease (COVID-19) since last year, the air in Jakarta has not improved, according to a report by the Center on Energy and Clean Air (CREA).

The CREA report said that transboundary pollution from Banten and West Java contributed to the poor air quality in Jakarta.

An air quality monitoring of pollution particles (PM2.5) recorded that Jakarta had 101 days in 2018 and 172 in 2019 with unhealthy air, given that there are 16 industrial facilities including power plants in Jakarta, 62 in West Java, and 56 in Banten, within a 100-kilometer radius of the city.

“Satellite images show that the Suralaya power plants in Banten were operating and emitting as usual during [COVID-19] restrictions. Winds brought their pollution into Jakarta, which may have contributed to Jakarta’s PM2.5 remaining high despite major reductions in local traffic and urban activity,” the CREA report said.