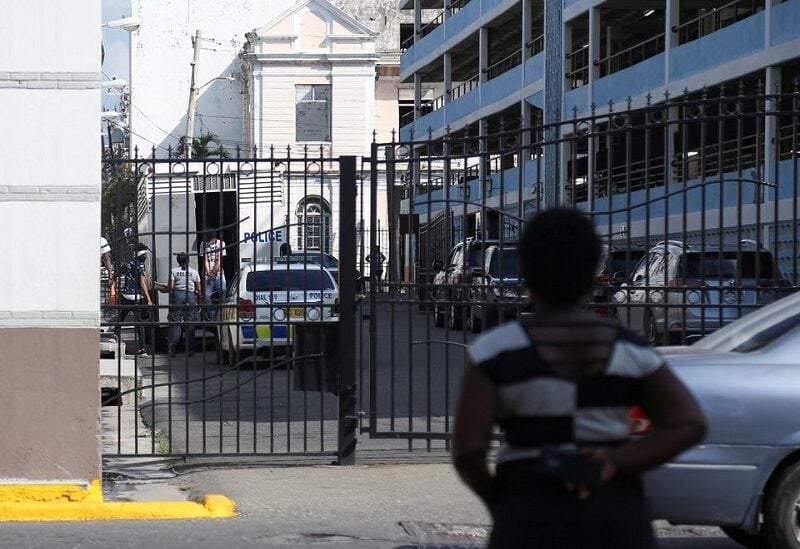 A woman watches as alleged gang members step out of a police truck after arriving at court, in Kingston, Jamaica January 28, 2022. REUTERS/Stringer

A trial of dozens of alleged gang members in Jamaica is testing recent judicial reforms designed to fight the island’s powerful criminal groups, widely blamed for the Caribbean nation having one of the world’s highest murder rates.

Jamaica’s Supreme Court is trying the 33 defendants on charges including arson, murder and being part of a criminal organization. The offenses were allegedly committed between 2015 and 2019 on the western outskirts of the capital Kingston.

The trial has shocked the nation with graphic testimony from ex-associates describing how the accused bragged to each other about murdering rivals, or became angry to learn they were lagging other gangs in killings.

Authorities say gangs are responsible for 70% of the country’s homicides, which rose 10% last year to reach 47.7 per 100,000 inhabitants, giving it the world’s highest murder rate, according to Reuters calculations.

The U.S. State Department says the island nation, home to nearly 3 million people, is a major source of illicit marijuana and a transit point for cocaine smuggled to the United States.

Prosecutors say the 32 men and one woman operated extortion rackets and gun-running schemes in Spanish Town, a city of 150,000 and the former site of a 16th-century Spanish colonial settlement later renamed when Britain captured the island.

On court days, screaming sirens mark the arrival of the convoy carrying the accused to downtown Kingston. Donning pressed dress shirts and jeans, they exit the vehicles handcuffed in pairs.

The accused, who have all pleaded not guilty, are alleged to have been members of the “One Don” gang, a breakaway faction of the “Klansman” gang – which has existed since the early 1990s.

Prosecutors have identified Andre “Blackman” Bryan as the One Don gang leader.

It was not immediately evident what the maximum sentence could be. National Security Minister Horace Chang did not respond to a request for comment.

Protections provided by last year’s reform of the Criminal Justice Act mean that, unlike previous trials, witnesses are not identified by name. The reform also allows judges to convict based on a wider range of offenses, which could increase the length of prison sentences.

“The trial is crucial in sending a message to the Jamaican criminal underworld that the state is serious about restoring peace in violence-prone communities,” said Damion Blake, an associate professor at Elon University who has served as security consultant to the government.

“It also helps in rebuilding the bonds of trust between citizens and the Jamaican state.”

Violent crime has jumped in recent years as Jamaica’s economy has been hard hit by the coronavirus pandemic. The economy contracted by 10% in 2020, according to official figures, as travel restrictions and border closures pummeled the vital tourism industry.

The high profile trial has also included allegations of political involvement in some gang activity.

PNP leader Mark Golding, asked by Reuters about the witness testimony, said: “I am not aware of this, and I’ve never seen anything at any PNP meeting to suggest that there is any truth to this allegation.”

The gangs raise revenue, however, from a wide range of sources, some of them far more lucrative. The State Department says Jamaican lottery scammers defraud U.S. citizens of an estimated $300 million annually.

Investigators say the victims, mainly vulnerable seniors, are targeted by criminals in Jamaica who use phone numbers stolen from call centers in Montego Bay, where foreign companies have customer service operations.

The scammers befriend the victims and convince them they have won a lottery but need to make an initial payment to collect their winnings.

Gang clashes often result in gun battles, leaving Spanish Town residents in danger of being caught in the crossfire.

“You might not go in the community at a certain time. We know when and when not to go in,” said one Spanish Town resident, a 38-year-old musician who asked not be named. “If the shots start fire now, people run, but they are not scared: they are used to it.”