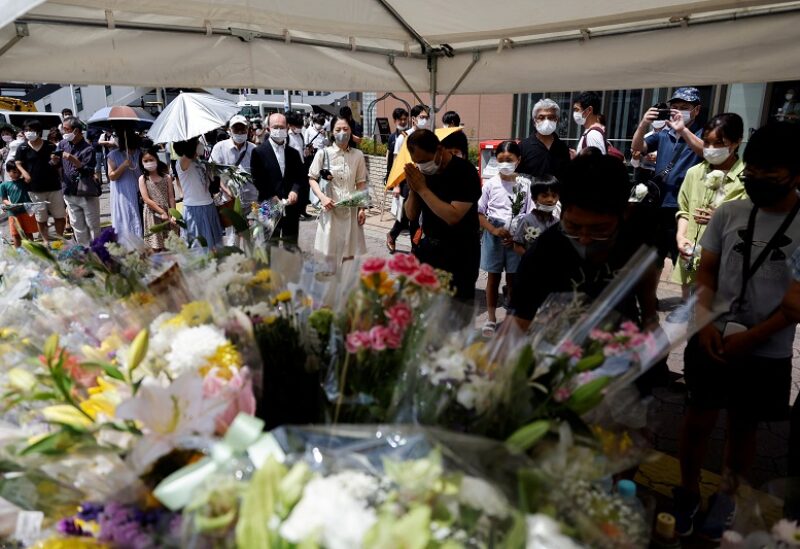 People queue up to offer flowers and pray at the site where late former Japanese Prime Minister Shinzo Abe was shot while campaigning for a parliamentary election, near Yamato-Saidaiji station in Nara, Japan, July 9, 2022. REUTERS/Issei Kato

Sending shock waves through the country known for its low levels of violent crime and strict gun laws, a long line of mourners on Saturday visited the site where Japan’s former Prime Minister Shinzo Abe was assassinated.

A funeral hearse carrying Abe’s wife Akie was believed to be transporting his body from the western town of Nara to Tokyo early Saturday.

Japan’s best-known politician was on the campaign trail when a 41-year-old man shot him with a homemade gun, police said. According to local media, the suspect had served in the navy and left Japan’s Self-Defense Force in 2005.

Public broadcaster NHK reported that the suspect confessed to police that he was unhappy with Abe and intended to kill him.
“I’m just shocked that this kind of thing happened in Nara,” said local housewife Natsumi Niwa, 50, after offering flowers with her 10-year-old son near the scene of the shooting.

“I just couldn’t sit back and do nothing. I had to come,” another Nara resident Sachie Nagafuji, 54, said, as he came to pay respects with his son.

Abe, a grandson of former Prime Minister Nobusuke Kishi, was Japan’s longest-serving premier. He was in office for a year in 2006 and then from 2012 to 2020.

Election campaigning resumed
Campaigning resumed a day before Japan is due to hold elections for its upper house of parliament. While polls were expected to deliver victory to the ruling coalition led by an Abe protege: Prime Minister Fumio Kishida.

Following Abe’s death, a visibly emotional Kishida described the killing as a “barbaric act” that was “unforgivable.” He added that he was “lost for words.”

However, the Liberal Democratic Party is expected to expand its victory as emotions run high in the East Asian country, experts say. James Brady, vice president at advisory firm Teneo, said: “A wave of sympathy votes now could boost the margin of victory.”

The attack has raised concerns about security for public figures in the country, which regularly sees politicians making direct appeals to voters in public places like train stations and supermarkets.

Several parties were set to keep senior figures from making public speeches on the final day of electioneering.
​​Abe was 52 when he first came into power. His first, turbulent term was marked by scandals and discord. His sudden resignation was initially thought to be due to political reasons, but he later cited a medical condition.

His terms were also marked by a failed attempt to rewrite Japan’s post-war pacifist constitution and his revisionist view on the country’s imperialist past, both of which stemmed from his grandfather, Kishi, who served as an official in territories occupied by imperial Japan during the Second World War before becoming prime minister.

He stepped down in August 2020, saying his chronic health problem had resurfaced.