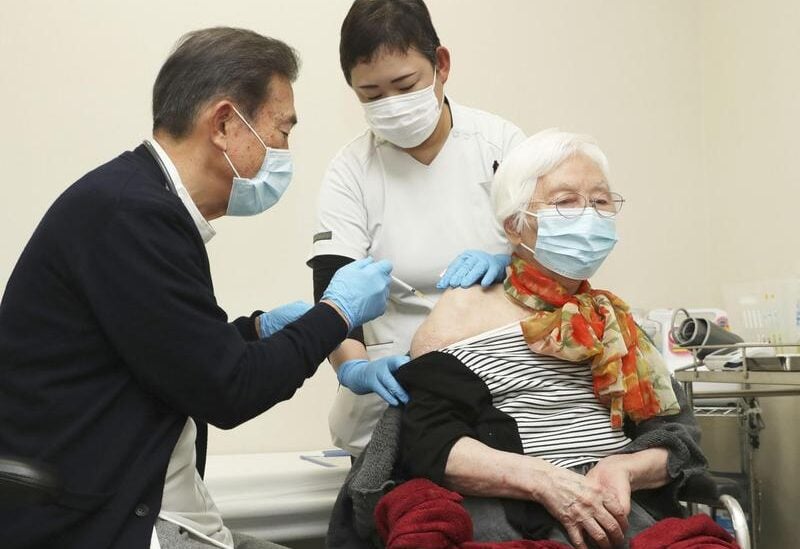 As Japan tries to speed up delayed third jabs to counter surging infections, Tokyo has launched a mass inoculation drive for COVID-19 booster shots at a temporary center operated by the military.

Japan began administering booster shots to medical workers in December, but has only provided such inoculations to 2.7% of the population after delaying a decision to cut the interval between the first two coronavirus shots and a booster to six months from the initial eight, AFP said.

Demand for the shots is intense: Online reservations that started on Friday resulted in all slots for about 4,300 doses to be given at the center this week being filled within 9 minutes. The center is providing the vaccine made by Moderna, Inc.

On a smaller scale, people 65 and older can get booster shots elsewhere.

The center run by the Self-Defense Force in downtown Tokyo reopened Monday after closing down in late November. It will be vaccinating about 720 people aged 18 or older per day this week, ramping up to more than 2,000 a day next month. Another military-run center will begin booster shots next week in Osaka.

The omicron variant has been spreading quickly, pushing new reported infections to much higher than earlier waves of coronavirus. Tokyo reported 15,895 new cases Sunday, a new high for a Sunday. Nearly half of its hospital capacity is filled. Nationwide, Japan recorded some 78,000 cases for an accumulated total of 2.68 million, with about 18,700 deaths.

A male resident in his 50s said in an interview with Japanese media that vaccination rollouts in his area were slow and he was relieved to get his shot. Another, in his 40s, said he was anxious to be vaccinated because omicron infections were spreading at his son’s elementary school.

Prime Minister Fumio Kishida visited the Tokyo vaccination center on Monday and said most cities are expected to finish providing booster shots for Japanese over 65 by the end of February. Younger Japanese are next in line, but many haven’t received the coupons required to apply for the shots and are unlikely to get boosters until March or later.

Kishida said a decision to close Japan’s borders to most new foreign travelers in late November had helped to slow the latest upsurge in infections.

The government has resisted imposing strict lockdowns to curb the pandemic, largely relying on requests to restaurants to shorten their opening hours and exhorting the public to wear face masks and observe social distancing.

Even though such practices kept the number of cases relatively low in most parts of Japan, and contributed to a sharp drop in infections in the autumn, the pandemic is taking a long, steady economic toll.

Pandemic restrictions are now in effect in much of Japan, including Tokyo and other big cities like Osaka and Kyoto, for the first time since September.

The government has faced harsh criticism over delays in its pandemic response, especially the slow start for the initial first two COVID-19 shots last year amid a shortage of imported vaccines. The inoculation rate reached nearly 80% after Kishida’s predecessor, Yoshihide Suga, set a goal of providing 1 million jabs daily to finish inoculating most of the elderly population before last year’s Tokyo Olympics.