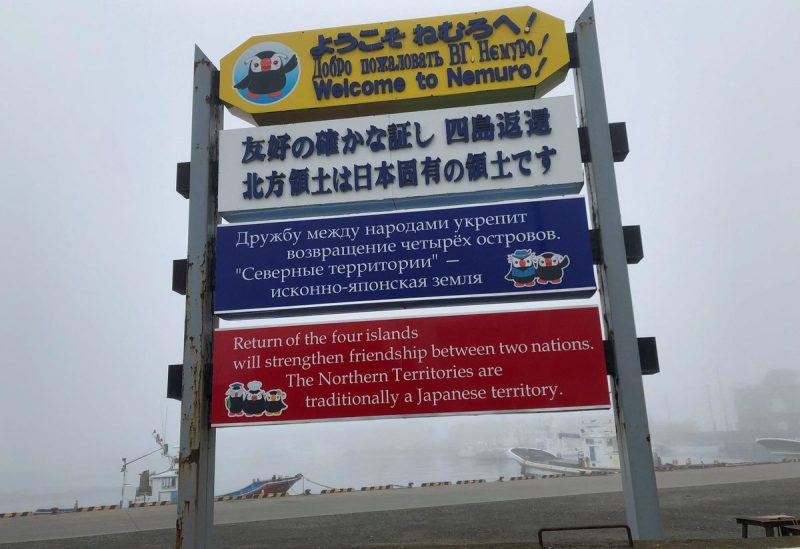 Signs demanding the return of a group of islands, called the Northern Territories in Japanese and the Kuril Islands in Russian, are displayed at Hanasaki Port, in Nemuro on Japan's northern island of Hokkaido April 12, 2022. REUTERS/Daniel Leussink

Because of their dispute over islands immediately off Japan’s most northern island, Hokkaido, which were taken by the Soviet Union at the close of World War Two, Russia and Japan have not officially stopped hostilities.

The islands are known in Russia as the Kurils and in Japan as the Northern Territories.

“It is absolutely obvious that it is impossible to discuss the signing of such a document (a peace treaty) with a state that takes openly unfriendly positions and allows itself direct threats against our country,” Rudenko told TASS in an interview.

“We are not seeing signs of Tokyo moving away from the anti-Russian course and any attempt to rectify the situation.”

Separately, Rudenko also said that Russia supports Beijing’s “One China” policy on the issue of Taiwan, reiterating Moscow’s explicit backing of China over the fate of the island where the defeated Republic of China government fled in 1949.

“Beijing is well aware that the Russian side invariably supports the People’s’ Republic of China on the Taiwan issue,” Rudenko said. “We proceed from the fact that there is only one China, the PRC government is the only legitimate government representing all of China, and Taiwan is an integral part of it.”

China claims democratically governed Taiwan as its own territory and has ramped up military and political pressure against the island over the past two years. Taipei strongly rejects Beijing’s sovereignty claims.