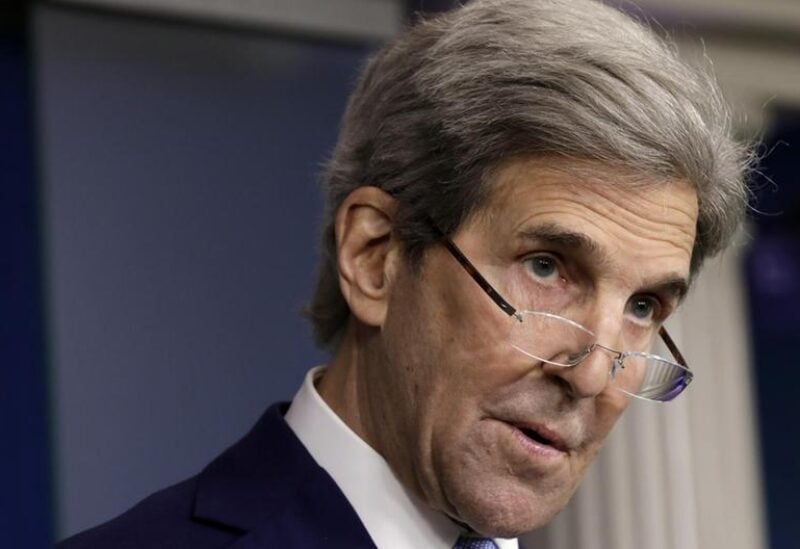 Former US secretary of state John Kerry on Tuesday denied allegations by Iran’s foreign minister that he leaked sensitive information about Israeli military operations to Iran.

The accusation surfaced in a leaked audio recording  in which Iranian Foreign Minister Javad Zarif recounted an interaction with Mr Kerry.

The accusation led to a backlash against Mr Kerry, who now serves as President Joe Biden’s special envoy for climate.

“I can tell you that this story and these allegations are unequivocally false. This never happened – either when I was secretary of state or since,” Mr Kerry tweeted.

I can tell you that this story and these allegations are unequivocally false. This never happened – either when I was Secretary of State or since. https://t.co/BTOdFE1khW

Mr Zarif did not reveal when Mr Kerry allegedly made the comments.

Former US president Donald Trump’s UN envoy, Nikki Haley, tweeted that the claim was “disgusting on many levels” and said Mr Biden and Mr Kerry “have to answer for why Kerry would be tipping off Iran, the number one sponsor of terror, while stabbing one of our greatest partners, Israel, in the back”.

In the US Senate, politicians also took aim at Mr Kerry.

“People are talking about treason – and I don’t throw that word around a lot,” said Republican senator Dan Sullivan, according to Politico.

Several other Republicans condemned the alleged remarks and called for Mr Kerry’s resignation and an investigation.

While the State Department did not comment on the leaked audio file, spokesman Ned Price appeared to suggest that the information about Israeli strikes against Iranian forces in Syria was already publicly available.

“I would just make the broad point that if you go back and look at press reporting from the time, this certainly was not secret,” Mr Price said on Monday.

“And governments that were involved were speaking to this publicly, on the record.”

Mr Price did not specifically address whether Mr Kerry made the comments to Mr Zarif, but implied that no sensitive information was shared if the interaction took place.

Lindsey Graham, a Republican senator, appeared to give Mr Kerry the benefit of the doubt, saying that Mr Zarif was not a reliable source.

“I like John Kerry, but that would not be helpful and it would be very problematic if it were true. But let’s wait and see how authentic this is,” Mr Graham said.

“I don’t know if we should trust that tape or not. If it’s true, it’s very damaging.”

There are regular air strikes on Iranian, Syrian and Hezbollah forces in Syria and although Israel does not often comment on specific strikes it has claimed responsibility in general.

But in 2018, Israel Katz, Israeli intelligence minister at the time, made one of the first public acknowledgements of the scale of Israeli strikes.

“In the last two years, Israel has taken military action more than 200 times within Syria itself,” he said.

“Understand the significance of this matter in terms of preserving the red line, preventing the things that Iran has done, is doing and is trying to do against Israel from Syria.”

Israel repeatedly said it would take action to prevent high-tech weapons transfers to Syria and stop threats to its borders or the occupied Syrian Golan Heights.

Mr Zarif’s comments came during a seven-hour conversation with economist Saeed Leylaz in March, as part of an oral history project. Three hours of audio from the conversation were leaked to the public on Sunday.

Mr Zarif commented on the leak on Tuesday, saying on Instagram that: “We should not work for history. Don’t worry about history, worry about God and the people.”