Julia downgraded back to tropical storm, crosses Nicaragua toward Pacific 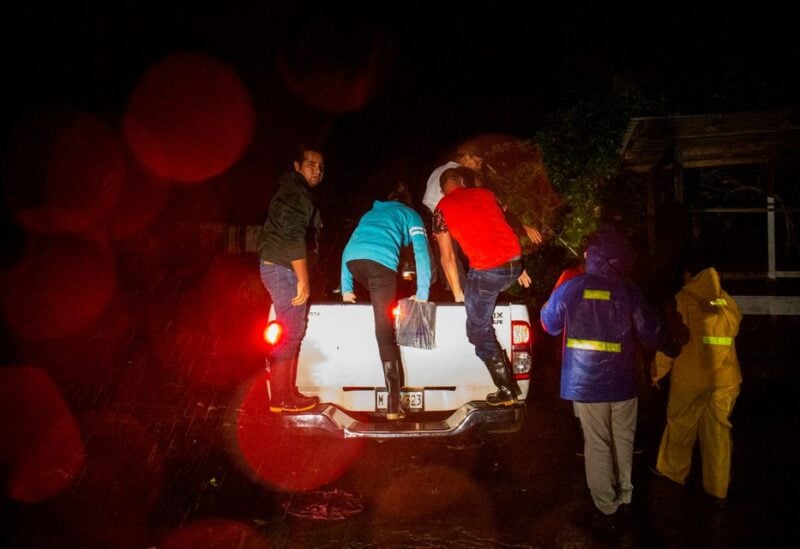 People get into a pickup truck to be transported to a safe zone while Hurricane Julia hits the coasts with wind and rain, in Bluefields, Nicaragua October 8, 2022. REUTERS/Maynor Valenzuela

Tropical storm Julia was downgraded to a tropical storm when it passed through the Central American country of Nicaragua after crashing into its Caribbean shore early Sunday morning and pummeling the region with rain, according to the US National Hurricane Center (NHC).

Through Tuesday, the NHC maintained its warning of “life-threatening flash floods and mudslides across Central America and Southern Mexico.”

The storm made landfall early on Sunday near Laguna de Perlas, the NHC said. By 9 a.m. local time (1500 GMT) it was around 65 miles (105 kilometers) east of Managua, Nicaragua’s capital. It is expected to emerge over the Pacific coast by Sunday night before moving north along the coasts of Honduras, El Salvador and Guatemala on Sunday and Monday, according to the NHC.

The Nicaraguan national disaster system said in a tweet on Sunday morning that residents living in the path of the storm could expect intense rains and wind, but reported no damage so far. Local media reported loss of electricity in coastal zones.

Colombia President Gustavo Petro said on social media on Sunday morning that Julia had left “light damage” on the country’s Caribbean islands of San Andres and Providencia off the coast of Nicaragua.

“As soon as air operations are restored, aid will arrive,” Petro said.

In high-risk zones in Honduras, authorities declared a red alert and called on residents to evacuate, as rains pummeled the country. In a Saturday tweet, El Salvador President Nayib Bukele declared Sunday as the “National Day of Prayer,” calling on citizens to “come together to pray and ask for God’s protection.”

Guatemala activated 1,855 shelters across the country, authorities said on Saturday, as it awaited heavier rains on Sunday afternoon.