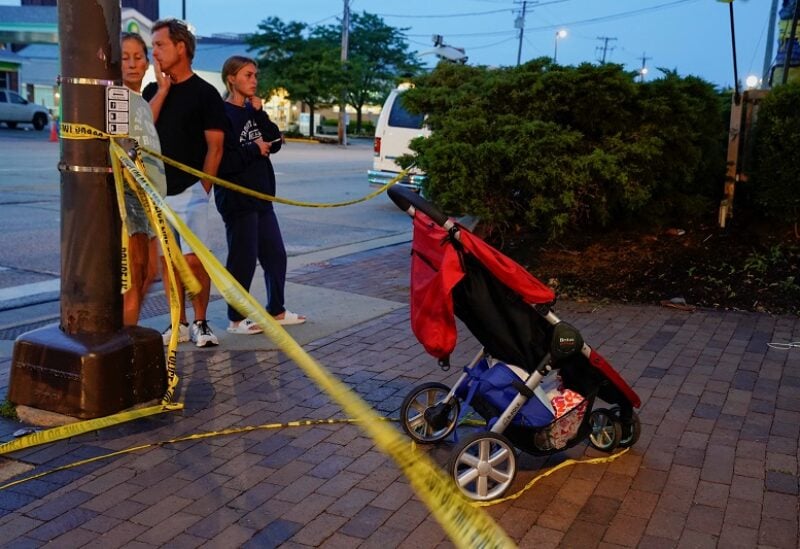 Community members visit the the site of a mass shooting at a Fourth of July parade route in the Chicago suburb of Highland Park, Illinois, U.S. July 4, 2022. REUTERS/Cheney Orr

In a move that further dividing a nation already torn apart by high court decisions on abortion and guns as well as hearings on the Jan. 6 uprising, six people at least were killed six people were killed in a shooting that rocked a Fourth of July parade in a Chicago suburb on Monday.

The most recent mass shooting occurred as the country looked for an occasion to commemorate its founding and the ties that continue to bind it. It was planned that people would skip work, attend parades, chow down on hamburgers and hot dogs at home barbecues, and congregate beneath the stars to watch fireworks.
As a few minutes, the Highland Park march abruptly came to an end after bullets were fired. Hundreds of parade attendees fled the scene, some of them were clearly injured, leaving behind blankets, chairs, and baby strollers. A person of interest was taken into custody by the authorities Monday night.

Fireworks started to explode as the Highland Park neighbourhood wept and around the nation. Soon after sunset, pyrotechnic displays erupted in Boston and New York City, where a kaleidoscope of colour illuminated skyscrapers and exploded over the Hudson River.

Also, Two police officers were shot in Philadelphia, Pennsylvania, while tens of thousands of people enjoyed a concert and fireworks display in honour of the Fourth of July.

Nearby to the Benjamin Franklin Parkway is where the incident happened. According to CBS3 Philadelphia’s story, which cited the police department, both officers were in stable condition. The shooter is being sought for by the police.

Also read | Highland Park: Person of interest in custody after shooting during US July 4 parade

President Joe Biden, in remarks Monday celebrating 246 years of America’s independence, sought to reassure a nation both exhausted and unsettled by recent events.

“In recent days, there’s been reason to think this country is moving backwards, that freedom is being reduced, that rights we assumed were protected are no longer,” Biden said in remarks to military families and administration officials enjoying a picnic on the South Lawn of the White House. “I know it can be exhausting and unsettling, but tonight I want you to know we’re going to get through all of this.”

Many people perceive America as being divided, but according to Biden, “I believe we are more united than we are divided.”

He described the killing in a tweet from earlier in the day as “senseless gun violence that has yet again brought sadness to an American town this Independence Day.”

“I will not give up fighting the epidemic of gun violence,” the president tweeted.

We live in uncertain times. The Highland Park shooting will have an impact on a nation already traumatised by recent mass killings at a Texas elementary school and a New York supermarket, as well as the economic crisis that looms.

Recent Supreme Court rulings that struck down a New York law restricting who is allowed to carry a pistol in public and that overturned the constitutional right to an abortion have also shown stark social and political disparities.

However, despite lowering coronavirus precautions, many had cause to congregate and celebrate for the first time in three years.

Due of the pandemic, Nathan’s Famous Fourth of July hot dog eating contest moved away from its usual venue in Brooklyn’s Coney Island district for two years.

In addition to commemorating togetherness and putting aside political differences, many people used July 4 to think back on the revolution that gave rise to history’s longest-lasting democracy.