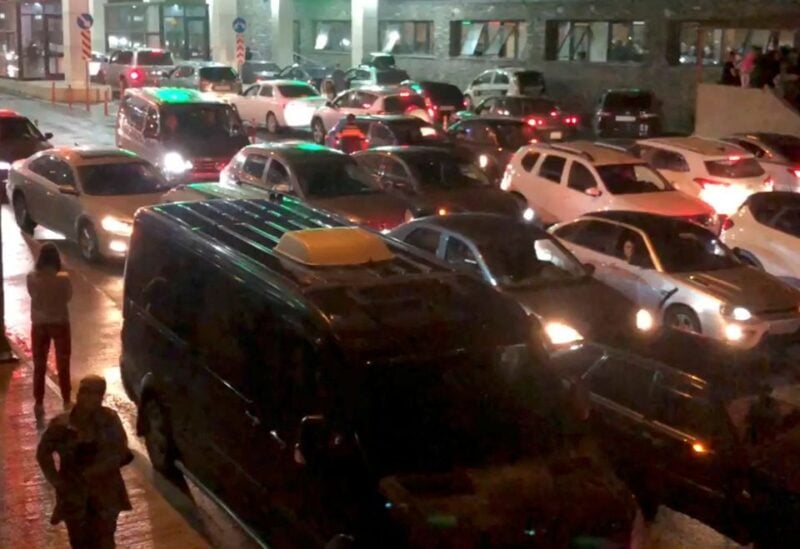 A queue of cars is seen at the Zemo Larsi/Verkhny Lars checkpoint on the Russia-Georgia border, September 21, 2022, in this still image obtained from a video. RFE/RL's Georgian Service/Handout via REUTERS

According to authorities, Kazakhstan is trying to house tens of thousands of Russians who have fled their nation since Moscow ordered a military mobilization last week, but the Almaty administration has no intentions to restrict its border.

After Russian President Vladimir Putin ordered the mobilization of reservists last week amid a delayed military operation in Ukraine, Russian men, some with families, began crossing the world’s second-longest land border in masse.

Russians do not need a visa or even a passport to enter Kazakhstan, just their Russian identity papers. The Russian language is also widely spoken in the country, which is home to a large ethnic Russian minority.

However, the sudden influx of Russians – the government says almost 100,000 have crossed the border since the mobilization announcement – has stretched the infrastructure of the vast but sparsely populated nation. Hotels and hostels are full, and rent has skyrocketed.

Kazakh President Kassym-Jomart Tokayev, whose administration has refused to support what Russia calls a “special military operation” in Ukraine, urged patience and tolerance.

“A lot of people from Russia have come here over the last few days,” he said in a speech on Tuesday. “Most of them were forced to leave by the desperate situation.”

“We must take care of them and ensure their safety. This is a political and humanitarian matter,” Tokayev said.

He stated that his government will discuss the problem with Moscow.

At the same time, the interior ministry released a proposal this week to amend immigration regulations, limiting Russians’ stay in Kazakhstan to three months unless they have a passport.

While some Kazakhs have already asked for border closures or limitations on Russian admission, others have organized meeting spots and volunteer networks to assist arriving Russians in finding refuge.

On Monday, an Almaty resident told Reuters that she took in three young Russian males who were planning to spend the night on the street in the downtown area. Some Russians spent the night in Oral at a local theater that welcomed them over social media.

“Right now, I’m crashing on my friends’ sofa,” said a 32-year-old Russian IT specialist who moved to Almaty and begged not to be identified.

“I don’t know what I’m going to do next, but I’m definitely not going back to Russia. I’m hoping to get some job here.”