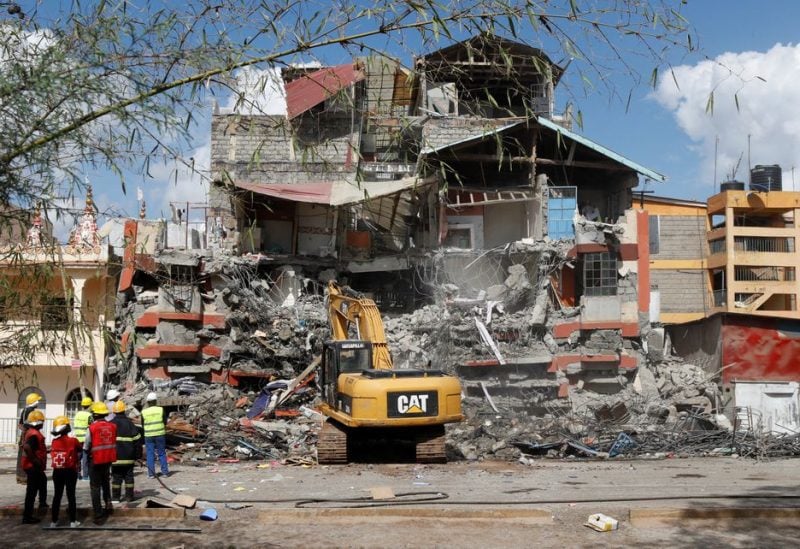 Engineers supervise the clearing of the ruins of an apartment block that collapsed after 200 tenants were evacuated in Ruiru, in the outskirts of Nairobi, Kenya November 21, 2022. REUTERS/Monicah Mwangi

An enormous bang and a cloud of dust woke Daniel Njoroge Karomo up.

Rushing outside, he discovered his parents’ five-story apartment building in the Kenyan town of Ruaka had collapsed while they were sleeping, crushing their corrugated metal house beneath it.

“We tried to climb in, we tried to crawl in to get them out,” the 36-year-old told Reuters, his parents’ wooden bed frame still poking out from the rubble. Five hours after the collapse last Thursday, rescue workers pulled out his parents’ bodies.

“It’s very painful,” Karomo said, angry at what he called the “negligence” that had allowed the development of the half-built block to proceed despite the family warning the Kiambu county government that the building was unsafe.

The collapse in Ruaka, north west of Nairobi, was one of three buildings to fall within a week in the capital and its satellite towns, which are expanding rapidly across the farmed hills around one of Africa’s fastest-growing cities.

The National Building Inspectorate found in 2018 that the majority of buildings it had audited were unsafe. Scores of Kenyans have died in collapses during the past decade.

Soaring steel and cement prices give developers further incentives to cut corners, or to add more floors without ensuring structures can handle the extra weight.

On Sunday, more than 100 people were evacuated from a block in Ruiru town after residents reported cracks that had widened to three inches following heavy rain.

Twelve hours later and the two-year-old building’s front pillars and walls gave in. A digger was busy dismantling the block on Monday as locals and police officers from the station opposite watched chunks of concrete come crashing down.

“This all started earlier than yesterday. The owner was trying to repair cracks but you could see the building was sinking day by day and there were more cracks everywhere,” said 22-year-old Charles Kamau, who lived next door and ran a shack outside selling mobile phone services.

Kiambu governor Kimani Wamatangi said preliminary investigations suggested that the collapse that killed Karomo’s parents was down to “poor workmanship” and that the owner – who was arrested on Monday trying to flee the country – had continued to build despite officials halting work in May.

The team responsible for approvals and inspections in Kiambu has been disbanded and all buildings in the county will be audited, Wamatangi added in a statement.

The scramble to cash in on the building boom has swelled the ranks of developers ready to bribe planning officers for permits and to avoid professional scrutiny, according to George Arabbu from the Architectural Association of Kenya.

Some counties have trialled digitalising approval processes but local officials demanded a return to the manual system, Arabbu said.

Back in Ruaka, Karomo said that an amateur could see that the columns supporting the now-collapsed building were badly aligned and that the cement mixture looked too watery.

Starring up at the mound of concrete while a memorial service was held in an adjacent courtyard, he said that he had urged his parents to move to another property but they refused.

“They were always here,” Karomo said, pointing to his grandparents’ home a few metres away, which was also damaged.