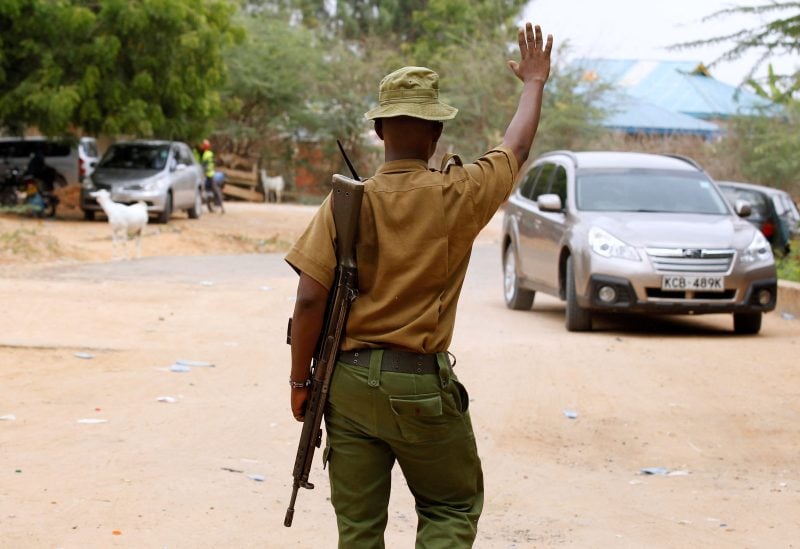 A police officer stops a car at the entrance of the Garissa University College in Kenya's northeast town of Garissa, January 11, 2016. The campus reopened nine months after an attack by Somalia-based al-Qaeda linked al-Shabaab Islamist militants. REUTERS/Thomas Mukoya/File Photo

Kenyan security forces have killed 10 members of the al Shabaab Islamist organization in eastern Kenya, according to a government official.

After battling the militants on Wednesday in the village of Galmagalla in Garissa county, they also found improvised explosive devices and rocket-propelled grenades, according to Thomas Bett, deputy county commissioner of the Bura East sub-county.

“The operation to flush out the Somalia militants’ group in the region was carried out by our multi-agency team … and (they) managed to neutralise 10 Islamist group militants and recovered assault weapons,” he told Reuters.

Spokespersons for al Shabaab, who frequently have their phones switched off, could not immediately be reached for comment.

Al Shabaab have attacked targets within Kenya for years to pressure the country into withdrawing its troops from the African Union-mandated peacekeeping force helping Somalia’s central government fight the group.

The Islamists have targeted security forces, schools, vehicles, towns and telecoms infrastructure in northeast and eastern Kenya, though the frequency and intensity of their attacks have declined in recent years.

Al Shabaab has been fighting for more than a decade to topple Somalia’s central government and establish its own rule based on its strict interpretation of Islamic sharia law.

Last week, the group killed four workers from Kenya’s highway authority when their vehicle hit an improvised explosive on a road in Garissa county, Onn Tuesday, one person died when a convoy was hit by a rocket propelled grenade in the same region, police said in a report.