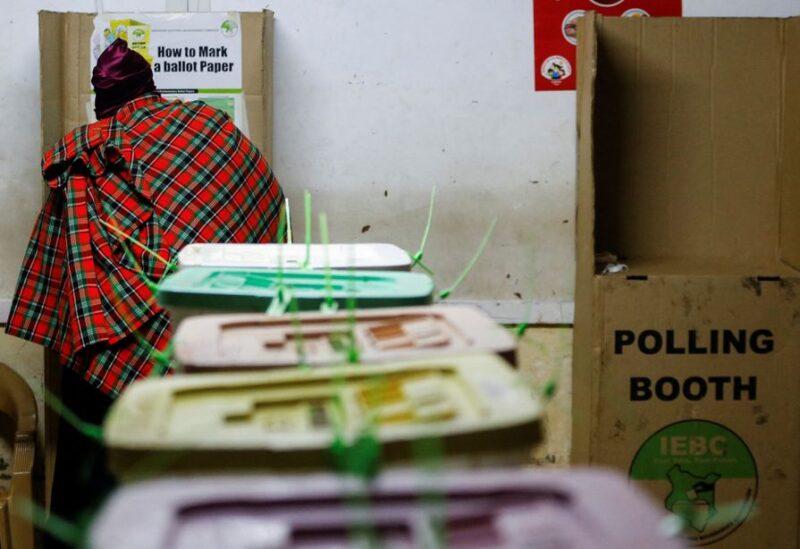 A voter casts her ballot during the general election by the Independent Electoral and Boundaries Commission (IEBC) at the Kibera primary school in Nairobi, Kenya August 9, 2022. REUTERS/Thomas Mukoya

Kenyans began casting their ballots for parliament and a new president early on Tuesday, but many individuals who are in need of help due to skyrocketing food costs and pervasive corruption have little faith that the new administration would bring about any change.

According to data from the electoral commission, a significant portion of young people have not registered to vote. Many people claim that they are irritated by growing inequality and a political system that is firmly in place and run by the same old elite.

President Uhuru Kenyatta is stepping down from the helm of East Africa’s economic powerhouse after reaching the end of his two-term limit.

The main candidates vying to replace him are far from fresh faces. William Ruto, 55, has been Kenyatta’s deputy for the past nine years, though the two men have fallen out.

Raila Odinga, 77, is a veteran opposition leader who, this time round, has won Kenyatta’s endorsement.

Many outsiders are watching the elections for president, parliament and local authorities closely. Kenya is a stable nation in a volatile region, a close Western ally that hosts regional headquarters for Alphabet, Visa and other international groups.

In some polling stations in the capital Nairobi, Garissa, and Naivasha, lines were shorter than in previous elections, although it was unclear if turnout would pick up later. Total turnout in the last election was near 80%.

Joshua Nyanjui in Naivasha said that it took him less than 30 minutes to vote, unlike in 2013 when he queued for over four hours.

“Kenyans are tired of waking up early and voting for a government that doesn’t care but we hope things will change,” he said. Other voters complained of high prices and hunger.

But lines were long in other areas and in the political heartlands of Odinga and Ruto.

“I feel honoured to be here,” said Gideon Mengech, who woke up at 3am to cast his ballot right after Ruto, at a polling station near the Rift Valley town of Eldoret.

David Onyango, 34, had been queuing for nearly four hours and said it was the biggest turnout he had ever seen.

Outgoing President Kenyatta has delivered an infrastructure boom, largely funded by foreign loans that will hang over his successors, but once said there was nothing he could do to tackle corruption.

Global rises in the price of food, fuel and fertilizers have also hit Kenyans hard.

Some voters wonder whether the next president will offer solutions to either corruption or the rising cost of living.

Kenya’s traditional ethnic voting dynamics may also dampen turnout. The largest ethnic group, the Kikuyu, have provided three out of Kenya’s four presidents. This time, there is no Kikuyu presidential candidate, although both front-runners have Kikuyu deputies.

Ruto comes from the populous Kalenjin community, based in the Rift Valley, while Odinga’s Luo ethnic group, among the biggest, have their heartland in western Kenya.

Ruto has sought to capitalise on growing anger among poor Kenyans and says he plans to create a fund to provide loans for small enterprises.

Odinga, who has competed unsuccessfully in four previous elections, has promised to tackle corruption and make peace with opponents after the election. The 2007 and 2017 polls were marred by violence after disputes over alleged rigging.

The final four opinion polls published last week put Odinga ahead with a margin of six to eight points, but Ruto has dismissed them as fake surveys designed to sway the electorate.

To avoid a run-off, a presidential candidate needs more than 50 percent of votes and at least 25 percent of the votes cast in half of Kenya’s 47 counties.

There are 22.1 million registered voters. Provisional results will start streaming in on Tuesday night, but an official announcement will take days.