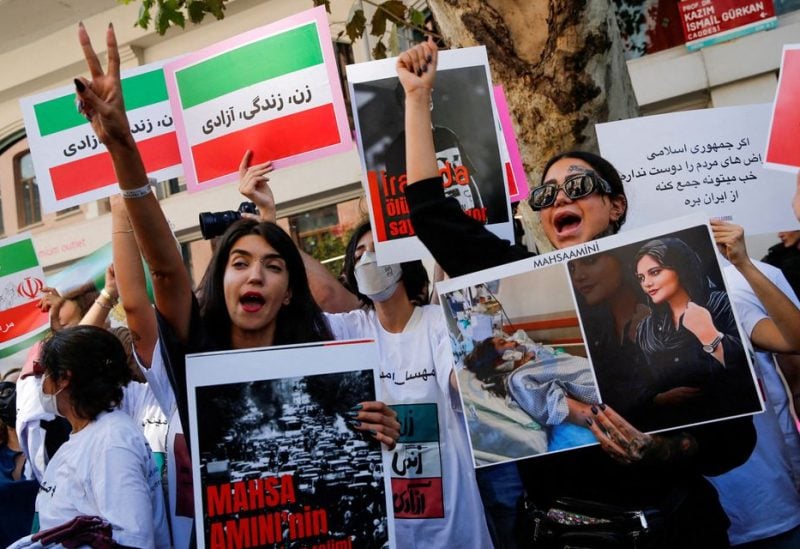 Demonstrators shout slogans during a protest following the death of Mahsa Amini in Iran, near the Iranian consulate in Istanbul, Turkey September 29, 2022. REUTERS

In his harshest warning to demonstrators since Mahsa Amini’s murder in police custody sparked widespread unrest in its fourth week, Iran Supreme Leader Ayatollah Ali Khamenei stated on Friday that no one should dare to assume they can overthrow the Islamic Republic.

Demonstrations by people from all walks of life in response to the murder of an Iranian Kurdish lady after her detention for “inappropriate dress” have morphed into broad calls for Khamenei and the Islamic Republic to be deposed.

The protests mark one of the boldest challenges to clerical rule since the 1979 revolution, even if the unrest does not seem close to toppling the system.

Khamenei compared the Islamic Republic to an unshakeable tree. “That seedling is a mighty tree now and no one should dare think they can uproot it,” he said on state TV.

Some of the deadliest unrest has been in areas home to ethnic minorities with long-standing grievances against the state, including Kurds in the northwest and Baluchis in the southeast.

According to rights groups, over 200 individuals have been slain in the crackdown, including adolescent females.

According to Amnesty International, at least 23 children have perished.

According to a witness, police were heavily deployed in the city of Dezful on Friday after activists called for protests in the primarily ethnic Arab, oil-rich province of Khuzestan near the Iraqi border.

Protesters in Ahvaz, the capital of Khuzestan, can be seen on social media yelling “Death to the tyrant.” Basij volunteer militia soldiers conducting the motorcycle crackdown were seen forcing civilians back.

“There are dozens of Basijis. Pushing protesters, beating them. Men, women are chanting ‘We are Kurdistan, We are Lorestan'”, a witness said, slogans that are meant to show solidarity among Iran’s ethnic minorities.

According to two witnesses, there was a strong deployment of police and the Basij in Zahedan, the capital of Sistan-Baluchistan province along the border with Pakistan in the southeast.

On Twitter, activist 1500tasvir shared a video purportedly showing protestors marching in Zahedan. They screamed, “Crimes, crimes, death to this religious leadership,” alluding to Khamenei, who has been in power for 33 years.

Iran has blamed the bloodshed on domestic and international foes, including armed separatists and Western forces. Authorities deny that security forces murdered protestors. According to state television, at least 26 members of the security forces were murdered.