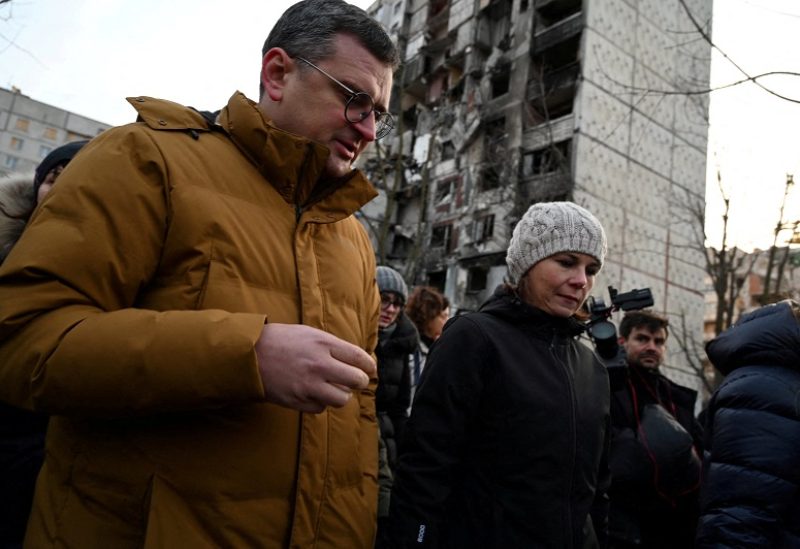 German Foreign Minister Annalena Baerbock and Ukrainian Foreign Minister Dmytro Kuleba visit a residential area damaged by Russian military strikes, amid Russia's attack on Ukraine, in Kharkiv, Ukraine January 10, 2023. Press Service of the Ministry of Foreign Affairs of Ukraine/Handout via REUTERS ATTENTION EDITORS - THIS IMAGE HAS BEEN SUPPLIED BY A THIRD PARTY.

“Stay in the shelters. The occupiers are bombing again!” regional governor Oleg Synegubov warned on Telegram.

Kharkiv has faced heavy bombardment during the war, but the frontline has moved east since a Ukrainian counteroffensive retook territory from Russian forces.
Baerbock, who on Tuesday became the highest-level Western official to visit Kharkiv, had pledged further German support for Ukraine.

“In all parts of Ukraine, from Kharkiv to Kherson to Kyiv, people should know they can rely on our solidarity and support,” she said.

She stressed that Germany will keep supplying weapons “that Ukraine needs in order to free its citizens who are still suffering under the terror of Russian occupation.”

Here are other related developments concerning the war in Ukraine on January 11:

“If people’s deputies choose to serve not the people of Ukraine, but the murderers who came to Ukraine, our actions will be appropriate,” Zelenskyy said in his regular video address.

Medvedchuk arrived in Russia in September as part of a prisoner exchange. Derkach, Kozak and Kuzmin are also believed to be in Russia and all four are suspected of having Russian citizenship.

The four lawmakers represented a pro-Russian party, Opposition Platform – For Life, which was banned following the beginning of the Russian invasion of Ukraine in February last year.

Ukrainian troops to train on Patriot system in Oklahoma
About 100 Ukrainian troops will head to Oklahoma’s Fort Sill as soon as next week to begin training on the Patriot missile defense system, getting Kyiv closer to obtaining the long-sought protection against Russia’s missile attacks.

The number of Ukrainians coming to Fort Sill is approximately the number it takes to operate one battery, and they will focus on learning to operate and also maintain the Patriot, Pentagon spokesman Air Force General Pat Ryder said.

Patriot training normally can take several months, but “the longer those troops are off the line, they’re not actually engaged in combat,” Ryder said, so the training will be shortened. Fort Sill was selected because it already runs Patriot training schools, Ryder said.

The US pledged one Patriot battery in December as part of one of several large military assistance packages it has provided Ukraine in recent weeks. Last week Germany pledged an additional Patriot battery.