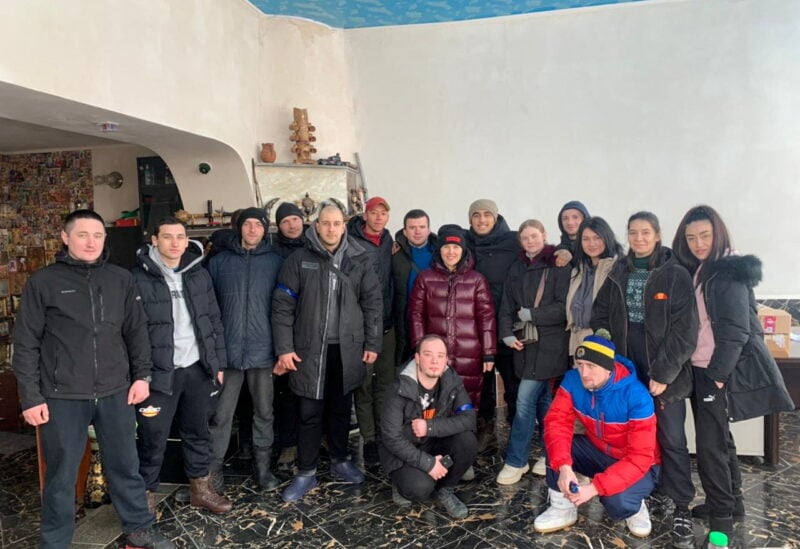 Local resident Teimur Aliev poses with his team of volunteers that deliver food and aid, amid the Russian invasion, in Kharkiv, Ukraine

The 23-year-old musician is in Kharkiv, a city in northeastern Ukraine that has seen some of the heaviest Russian bombardment and has seen dozens of civilians killed.

As soon as the war began on February 24, Aliev and his older brother Ramil gathered all of their money and went out to buy food and other necessities, which they then distributed to people who couldn’t get to shops themselves.

From a small beginning, his venture has expanded with the help of social media to involve dozens of volunteers who get as many supplies as they can from wholesale warehouses and shops, bring them to a collection point and distribute them by car and on foot.

As he drives through Kharkiv, his videos show badly bombed buildings lining wide streets, burned out cars riddled with shrapnel holes and debris strewn across the ground.

“I am a young guy, a rapper, a musician who was just lying at his home on the outskirts of the city of Kharkiv,” he told Reuters, describing the start of the shelling. “I … started waking up to a terrible rumbling noise.”

In an interview recorded over Zoom, he added: “We will stitch up the wounds and the pain of our country and our city. We are ready to build it and we are ready to renew it when the war is over. We’re not going anywhere.”

Moscow has denied targeting civilians in the war, which it calls a special operation to demilitarise and “de-Nazify” Ukraine.

Aliev, who is half-Azeri, half-Ukrainian, said people from overseas had initially donated money, but that the war had made withdrawing cash from banks much harder.

He is asking people to send food instead – still technically possible because Kharkiv is not yet cut off by Russian forces.

Footage and photographs he shared feature him and his helpers delivering groceries to families sheltering in basements and elderly people in a dormitory.

They also show friends handing flowers to women on Women’s Day on March 8 – a major public holiday in former Soviet countries like Ukraine but one that was largely forgotten in the war zone. As a violinist plays, some women grin, others cry.

Aliev said that once he got over his initial fear when the shelling began, he has managed to remain positive – for the sake of himself and others.

“Well, what is the point of being afraid?” he asked. “A smile is the most important thing. A smile gives kindness to all other people.”