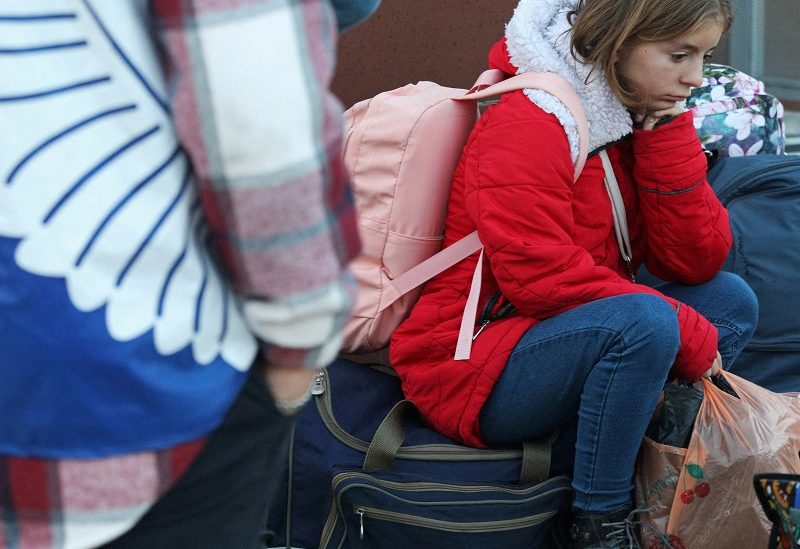 FILE PHOTO: A girl sits on a bag as civilians evacuated from the Russian-controlled Kherson region of Ukraine arrive at a railway station in the town of Dzhankoi, Crimea October 24, 2022. REUTERS/Alexey Pavlishak/File Photo

“Moscow’s military is fortifying itself to stave off advancing Ukrainian soldiers,” said a senior Ukrainian official, adding that the crucial southern province of Kherson, which is partially under Russian control, will see “the heaviest of battles.”
The largest metropolitan centre Russia still controls since conquering it early in the invasion of Ukraine eight months ago is Kherson, the region’s principal city and river port, which had a pre-war population of roughly 280,000.
Since early October, when Russia claimed to have annexed Kherson and three other provinces—a move denounced by 143 nations at the UN as an “attempted illegal annexation”—Ukrainian forces do not seem to have made much progress in their counteroffensive in Kherson.

“With Kherson everything is clear. The Russians are replenishing, strengthening their grouping there,” in a video posted online on Tuesday night, Oleksiy Arestovych, a counsellor to Ukrainian President Volodymyr Zelensky, made a statement.

“It means that nobody is preparing to withdraw. On the contrary, the heaviest of battles is going to take place for Kherson, “Arestovych, who did not specify when the conflict would take place, said.

Kherson is undoubtedly the most crucial province in terms of strategy out of the four that Russian President Vladimir Putin declared to have been annexed. Both the mouth of the massive river that divides Ukraine, the Dnipro and the single land access point to the Crimean peninsula that Russia annexed in 2014 are under its authority.

Thousands of citizens have been evacuated by boat to the eastern bank of the Dnipro from the west bank of the city of Kherson, which is administered by a Russian-backed government, after receiving televised warnings that Ukrainian forces were ready to attack the city.
Artillery battles continued all day Tuesday in the Mykolaiv region to the north and west of Kherson city, according to a post from the frontlines on Rybar, a pro-Russian channel on the Telegram messaging app.
Ukrainian soldiers attempted to strengthen their positions in the Ishchenka district, north of Kherson, but were pushed back to earlier lines, according to the report. According to it, the Ukrainian military was getting ready to advance the entire lines.
One of Russia’s major failures in the conflict would be a loss in Kherson.