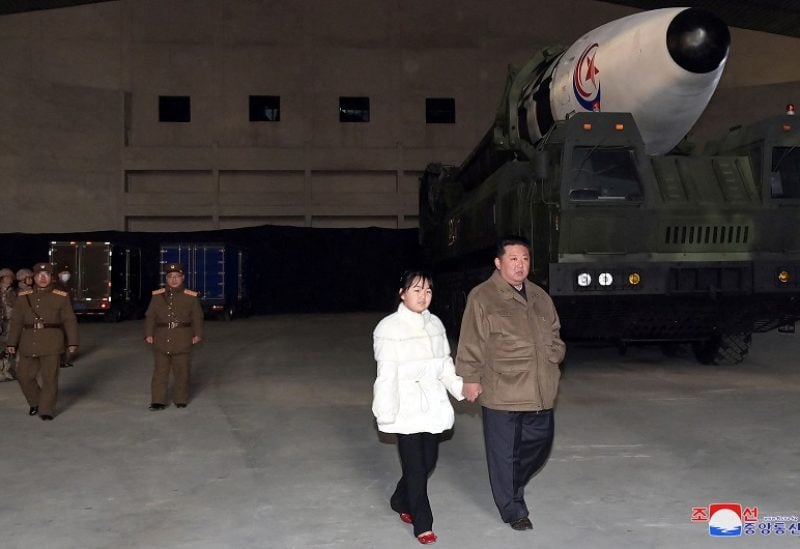 North Korean leader Kim Jong Un, along with his daughter, inspects an intercontinental ballistic missile (ICBM) in this undated photo released on November 19, 2022 by North Korea's Korean Central News Agency (KCNA). KCNA via REUTERS ATTENTION EDITORS - THIS IMAGE WAS PROVIDED BY A THIRD PARTY. NO THIRD PARTY SALES. SOUTH KOREA OUT. NO COMMERCIAL OR EDITORIAL SALES IN SOUTH KOREA. REUTERS IS UNABLE TO INDEPENDENTLY VERIFY THIS IMAGE.

North Korean leader Kim Jong Un, and a day after launching an intercontinental ballistic missile that landed in Japan’s exclusive economic zone (EEZ), said his country will respond to continued threats by using nuclear weapons. On the same day, images of Kim with his young daughter in public for the first time were released, confirming the long-drawn rumours of her existence.
“Kim Jong Un solemnly declared that if the enemies continue to pose threats…our party and government will resolutely react to nukes with nuclear weapons and to total confrontation with all-out confrontation,” reported state media Korean Central News Agency (KCNA) before adding that Kim attended the missile launch on Thursday alongside his daughter and wife.
The North Korean leader was responding to USA and Japan after the two allies held joint military drills over the Sea of Japan on Friday. According to KCNA, Kim slammed the drills by calling them “aggression war drills”.
Japanese defence ministry makes the announcement
A day earlier, the Japanese defence ministry announced that Tokyo and Washington were holding a military drill in the region.
“Japan Self-Defense Forces and US armed forces conducted a bilateral exercise… amid an increasingly severe security environment surrounding Japan,” read the official statement.
The statement added that the drill was a reaction to “North Korea’s ICBM-class ballistic missile launch that landed within the Japanese Exclusive Economic Zone in the Sea of Japan.”
The ministry added that ICBM launched was one of the longest-range weapons in North Korea’s arsenal and according to reports, it can be capable of launching carrying nuclear warheads as far as the coastal regions of the US.
North Korea has taken a rather aggressive stance in the last few months by launching a flurry of missiles in the region. In September, Kim declared North Korea an “irreversible” nuclear state, putting the major powers across the globe on their toes.