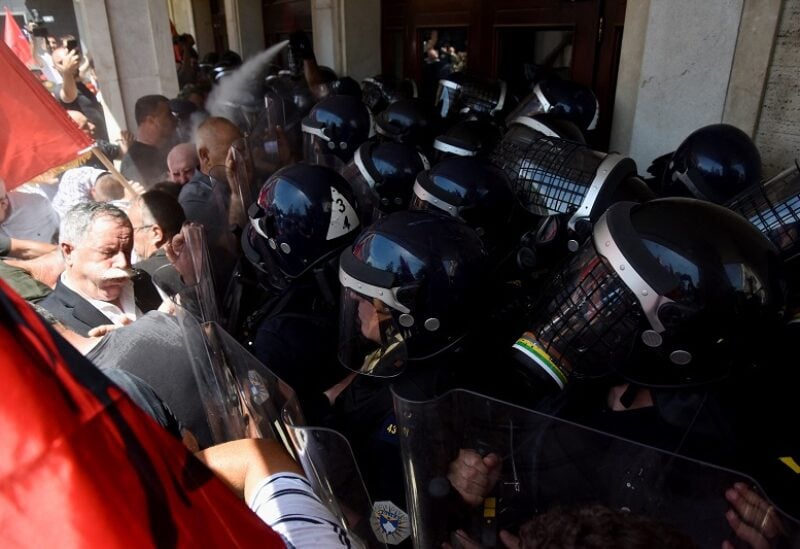 Riot police use spray during a protest of Kosovo War veterans asking for a pension rise, in front of the parliament building, in Pristina, Kosovo June 6, 2022. REUTERS/Laura Hasani

As members of the War Veterans’ Organization of the former guerrilla Kosovo Liberation Army (KLA) tried to enter the national parliament on Monday, Police were reported to have used tear gas against them.

The veterans accuse authorities of overlooking the role they played in achieving statehood for Kosovo in a 1998-1999 uprising against Serbian rule.

Some 2,000 protesters had gathered for the protests, many of them waving KLA flags.

Police said protesters had “tried to enter by force and damage the parliament building doors” and had also used tear gas, as well as “hard objects” against officers.

Police denied using tear gas, although at least one officer appeared to be shown doing so by local news media.

Officials reported that a civilian and two police officers were injured in the clashes.
The clashes came as lawmakers prepared to debate a law to raise minimum public sector wages. The bill does not include an increase for some 50,000 registered veterans of Kosovo’s 1998 to 1999 uprising against Serbian rule.

More than 30,000 of the war veterans get €170 per month ($182) for their pensions. The International Monetary Fund (IMF) has warned that Kosovo, mired in poverty and corruption, cannot afford to extend higher benefits to them.

More than 13,000 people, most of whom were ethnic Albanians, died during the war before Serbia was forced to pull its troops out of the country after a NATO bombing campaign.

Kosovo, which unilaterally declared its independence from Serbia in 2008, has been recognized by the United States and much of the West, including Germany. It is not recognized as a sovereign state by Serbia or its allies Russia and China.